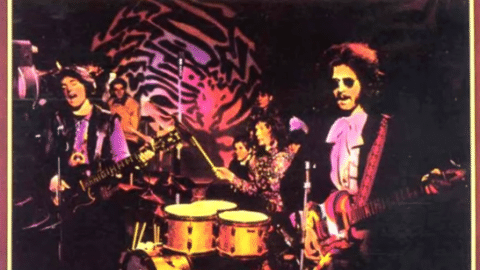 Many rock acts are rooted in blues and so it comes as no surprise that several of them took blues standards and gave them a rock treatment. Let’s revisit these songs that were originally blues but were later reworked.

The Doors – Back Door Man

Written by Willie Dixon and originally recorded by Howlin’ Wolf, The Doors included it in their eponymous debut album. In their early days, The Doors played several blues tunes when they had shows at small clubs. It was part of their setlist at the Isle of Wight Festival and it was also the song they were playing at a gig in New Haven, Connecticut on December 9, 1967 when frontman Jim Morrison was famously arrested mid-performance.

Credited to Lead Belly as its author, “Black Betty” has been recorded by several artists but one of the most successful versions was that from short-lived group Ram Jam. It was an instant hit which appeared in films and video games. It was Ram Jam’s only hit thus making them a one-hit wonder.

“Cross Road Blues” was written and first recorded by Robert Johnson. It was rock supergroup Cream who popularized the track in the late ’60s. It became a staple in the band’s repertoire. According to Eric Clapton, “In ‘Crossroads’ there was a very definite riff… I just took it on a single string or two strings and embellished it. Out of all of the songs it was the easiest for me to see as a rock and roll vehicle.”

Originally recorded by Otis Rush, Led Zeppelin featured their cover in their self-titled debut album. Guitarist Jimmy Page told Guitar Player, “There are mistakes in it, but it doesn’t make any difference. I’ll always leave the mistakes in. I can’t help it. The timing bits on the A and Bb parts are right, though it might sound wrong.”

Janis Joplin – Piece of My Heart

With her unique and powerful voice, Janis Joplin took the song and made it her own. It’s an Erma Franklin original and Joplin covered it for her album with Big Brother and the Holding Company titled “Cheap Thrills”. It was also part of their setlist at Woodstock Festival. Franklin later said in a 1973 interview, “Her version is so different from mine that I really don’t resent it too much.”

Written and first recorded by Blind Willie McTell, Taj Mahal’s blues rock reworking of the song inspired The Allman Brothers Band’s version. Duane Allman’s slide riffs are the highlights of the “Statesboro Blues”. After his tragic death, the band paid tribute to him by playing this song.

First recorded by blues legend Robert Johnson, it’s been covered by a plethora of artists but Foghat’s version reigns supreme.

The Animals – The House of the Rising Sun

The Animals struck gold with their version of this song. They were on a tour with Chuck Berry at the time and wanted something that would make them stand out. Frontman Eric Burdon heard this being played in a club and decided to rework it. He explained to SongFacts, “‘House of the Rising Sun’ is a song that I was just fated to. It was made for me and I was made for it. It was a great song for the Chuck Berry tour because it was a way of reaching the audience without copying Chuck Berry.”

The Rolling Stones – Time Is on My Side

First recorded by Kai Winding, The Rolling Stones made two versions of this. They incorporated elements of Irma Thomas’ rendition. It became the Stones’ first top ten hit in the US. Guitarist Keith Richards said, “Time Is On My Side,’ ‘Tell Me,’ ‘Heart of Stone,’ that was what we were known for. Strangely enough that was our thing.” He added, “Every single was a slow song… You’d think they’d be clamoring for out-and-out rock and roll, but no, it was the soul ballads that happened for us in America.”

Led Zeppelin – When The Levee Breaks

An original recording by Kansas Joe McCoy and Memphis Minnie, Led Zeppelin overhauled it and featured it on their untitled fourth album. From Jimmy Page’s guitar riff to John Bonham’s drumming, these two made their version different from all the others.