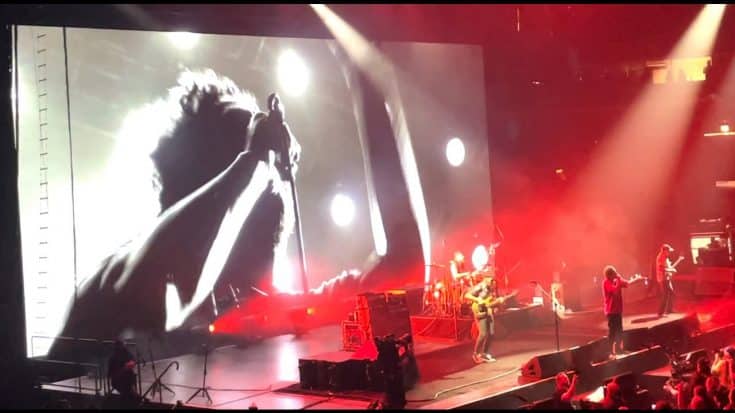 Rage Against the Machine‘s lead singer Zach de la Rocha, has suffered a leg injury during their show on July 11 in Chicago.

The singer injured himself while the band was performing “Bullet in the Head,” taken from their 1992 self-titled album. He was bouncing around along the song’s intense part, when he started moving more subtly and began hobbling onstage.

“de la Rocha sustained the injury four songs into the band’s main set” and was “helped off stage by the band’s crew members,” according to Consequence. The rocker then addressed the crowd after taking a short break, saying:

“I don’t know what happened to my leg right now. but you know what? We’re gonna keep this fuckin’ shit goin’. If I have to crawl across this stage. We’re gonna play for y’all tonight. We came too fuckin’ far.”

After that, the band began performing their 1999 classic “Testify,” with de la Rocha singing while perched on a stage monitor. The frontman, who is often enthusiastic, was noticeably unable to perform the rest of the night. De la Rocha allegedly made several attempts to stand, but was unable to support any weight on the damaged leg.

The highly anticipated Public Service Announcement tour by Rage Against the Machine was initially planned for 2020 but was twice delayed. The trek kicked off on July 9 in Wisconsin and is the first time they have toured together since 2011. They had only two shows prior to their Chicago stop, but they are scheduled to continue until September.

Meanwhile, De le Rocha’s condition has not yet received an official update. Tweets from the audience showed the singer being carried off the stage after the performance. Check out some of the fan-filmed videos below.

Zack De La Rocha getting carried off the stage after going through an entire show injured #RATM pic.twitter.com/dVhh0xN4Mh

Zack De La Rocha just gave a better performance while sitting than most artists give on their two feet. Hope he is ok but what a fucking show! #RageAgainstTheMachine #PSATour pic.twitter.com/dklPzTsvJZ