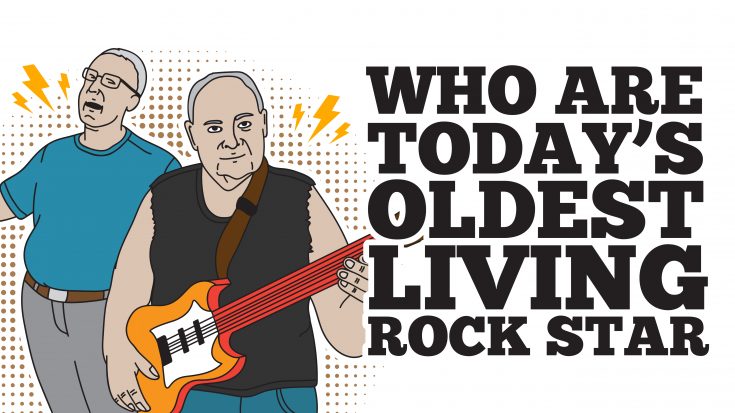 In the words of the Prince of Darkness Ozzy Osbourne himself, 2016 was the year of the dying rock stars. He said,

We may have lost many great music legends from the world of rock n’ roll this year but it’s refreshing to find out there are still some who are aging gracefully and continue to amazingly defy the rockstar “live fast, die young” motto. Some even still perform, going strong in their 80s and 90s! The life expectancy of rock stars is not pretty long, with their world of drugs, alcohol, and everything else in between, it’s a miracle if they cheat death even when they’re still young, wild, and gorgeous. Maybe it’s good genes or just plain ol’ good luck, these 10 musicians are still thankfully with us to this day. And they’re not done “living fast” either.

Born on December 24, 1918 (yes even before the roaring ’20s!), Dave Bartholomew is one of the pioneers of the Rock N’ Roll revolution, and one of the oldest musicians still alive today. A man of multiple musical talents, he has a place in every important hall of fame you could think of. He was inducted into the Songwriters Hall of Fame, the Rock and Roll Hall of Fame, and the Louisiana Music Hall of Fame. Most prominently known as a songwriter, producer, ad arranger in the music industry, Bartholomew gained his musical chops from playing the trumpet and tuba in the New Orleans blues scene. He is the man behind the hit “Country Boy,” in 1950 and the self-proclaimed inventor of the “Big Beat”. Well it’s certainly a big life at 97 going on 98!

Now known as the oldest active active legendary master Blues pianist at 91 years old, there’s no stopping the rollicking fingers of Henry Gray. Born on January 19, 1925, this Louisiana native has been playing for a whopping seven decades. He’s also jammed with the greatest of rock n’ roll such as The Rolling Stones, Howlin’ Wolf, Morris Pejoe and many more with more being credited in more than 58 albums. Gray is a pioneer in the development of the distinct Chicago blues piano sound. He has lived and continues to live a very colorful life, having been a World War II veteran and a survivor of the Louisiana flood which wiped out his home and belongings. He continued to tour after losing his home and even picjed up a Lifetime Achievement Award from the Blues Blast Awards in Chicago.

With a career spanning more than 70 years, Roy Haynes has certainly made his mark in the rock n’ roll world as one of the most recorded drummers in music. He’s capable with a wide array of musical styles ranging from swing to jazz fusion and even into the complex genre of avant-garde jazz. Age isn’t stopping him either as he even celebrated his 90th birthday with a concert gig that lasted into the wee hours of the morning with his friends and fellow musicians. His inexhaustible career is celebrated by many great rock legends as well. He has collaborated The Rolling Stones,  Allman Brothers Band and Phish. He has garned the nickname “Snap Crackle” in the 1950s for his expressive personal style in drumming and continues to make history with music until today.

Still strong and creative at 90 years old, Rock N’ Roll vet Chuck Berry has announced he will be releasing an album after 38 years. The man behind the iconic staple tracks such as “Johnny B. Goode” and “Maybellene”, was born October 18, 1926 and became another pioneering artist for rhythm and blues in the 1940s and ’50s. He’s outlived even the great and famous musicians whom he’s influenced in the music industry. The Beatles and the Rolling Stones credit Berry as an inspiration to them. He’s most notable work would be his distinctive guitar style and technique and his signature guitar solos. His technique has been widely adapted by many blues and rock guitarists. It’s nice to know the man who popularized the duck-walk on stage is still as energetic as he was more than 60 decades ago.

Dubbed as the “modern day piped piper”, American rhythm and blues saxophonist Big Jay McNeely is one of the oldest living blues rock legends who had a big impact during rock’s primordial era. He is the man behind classics such as “There Is Something on Your Mind” and. An interesting phase in his life came with the dawn of the ’60s but not particularly for the good of his music career. Saxophonists weren’t as favored in the 60s with the birth of hard rock, metal rock, and punk rock and so McNeely became a mailman for a while. Luckily, he made a comeback in the early ’80s and has remained active in the industry to this day. Just in 2016, at the age of 89, he released his album Blowin’ Down the House: Big Jay’s Latest & Greatest.

Johnny Thunder ( born Gil Hamilton on August 15, 1932) is the singer behind the 1963 hit “Loop De Loop” and “I’m Alive. Having worked with a variety of artists such as Dionne Warwick, Johnny O’Keefe, Bob Dylan, and The Exciters, his long singing career has been active since the late 1950s. He was persuaded to change his year of birth from 1932 to 1941 to appeal better to the teenage market. His single “I’m Alive” his one of Bob Dylan’s favorite songs. Bob Dylan said of the song,
“It was one of the most powerful records I’ve ever heard. It’s called ‘I’m Alive.’ By Johnny Thunder. Well, it was that sentiment, truly expressed. That’s the most I can say … if you heard the record, you’d know what I mean.” He was still touring even well into his late 70s.

It is highly arguable that Yoko Ono would actually be considered a “rock star” here. After all, she did endure decades and decades of dismay from the public, being widely blamed for the break up of The Beatles. But no matter what conspiracy surrounds her, she is still in fact an artist and a musician. An avant-garde one at that. And we have to remember this her artistry attracted John Lenon, with whom she also created some great music with. At 83 years old, she’s still a strong and prominent public figure. And at 83, she’s still denying allegations of her being the reason the great Fab Four fell apart. Also, at 83, she’s recently released a remix album called “Yes, I’m a Witch Too” which features versions of her songs reworked with other artists such as alternative rock group Death Cab for Cutie, punk rocker turned dark electronic DJ Moby and her son Sean Lennon.

Another Rock N’ Roll pioneer Lloyd Price is still healthy, wealthy, and still the best known “Mr. Personality” today at age 83. One of Price’s earliest collaborations was actually with another one in this list, Dave Bartholomew. Bartholomew created arrangements for Price under Specialty Record for the rock n’ roll classic hit “Lawdy Miss Clawdy” which Elvis Presley eventually did a cover of. He is also well-known for the edgy song “Stagger Lee” which marked a big impact in the rock n’ roll scene. In 1998, Price was inducted into the Rock and Roll Hall of Fame. Lloyd Price is such a big name inhis native Louisiana that they named a street after him in the city of Kenner, Lloyd Price Avenue. The city also celebrates an annual Lloyd Price Day. A Broadway musical was created based on his massive hit “Lawdy Miss Clawdy,” for which he had a hand in together with a team that included the producer Phil Ramone. The stage musical tells the story of how rock and roll evolved from the New Orleans music scene of the early 1950s.

The legendary outlaw Willie Nelson has been playing music since The Great Depression. Literally. He wrote his first song at 7 years old and joined his first band at the age of 10. Today, he remains one of the most prominent figures in the music industry even at the age of 83. That means music has been in his life for seven decades and a half! Aside from being a legendary musician, Willie Nelson is also an actor, an author, a poet, and an activist. He has penned a number of books and has even acted in over 30 films and the octogenarian has no plans of stopping just yet. One of the main icons to develop the country sub-genre, outlaw country in the 1960s, Nelson has been known to be involved in activism, lobbying for the use of bio-fuels and the legalization of marijuana. Despite his age, he still tours and does about 200 shows a year.