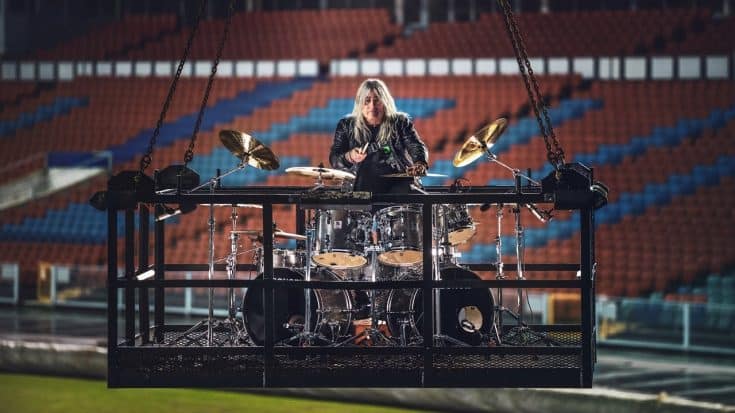 The legendary drummer of Motorhead and Scorpion Mikkey Dee was daring enough to play a drum solo midair for the latest commercial of a new line of Volvo Trucks.

Since the rocker owns a license to drive heavy-goods vehicles, both him and driver development manager Tatu Ljokkoi have a few clips demonstrating how to operate and explain the advantages of these electricity powered heavy-duty vehicles. The first ad was to use it for a cool performance as to what Volvo called it “the possibly highest-ever drum solo,” showing the vehicles’ capacity for creative uses.

In the other ad, Dee showed Ljokkoi his 1981 paperwork before driving off with the FH model vehicle. While in another clip, both of them showed the amount of control the driver has with the FMX model as the massive truck gently touched the bass guitar without it knocking over.

Volvo said in a statement:

“The electric driveline contains fewer moving components and the responsiveness from pressing the accelerator to powering the wheels is immediate and precise.

“This makes maneuvering in tight and challenging spots easy and controllable, even for an unexperienced driver. Heavy metal drummer Mikkey Dee … is known for his intense double-pedal technique. Has he got what it takes to precision drive a 32-tonne Volvo FMX Electric truck down a steep slope? Take a look at this video to find out.”

Dee officially joined Scorpions in 2016 following the death of Motorhead founder Lemmy Kilmister. The drummer said at that time:

“These guys are so nice, and we’ve known each other for many, many years and it’s a great honor to carry the Scorpions flag here.”