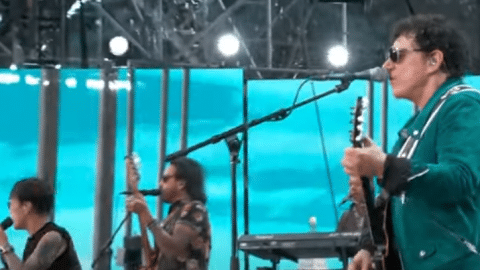 Journey recently played at We Love NYC: The Homecoming Concert at New York’s Central Park on Saturday in front of 60,000 fans. They performed a pair of classic hits – 1980’s “Any Way You Want It” and 1981’s “Don’t Stop Believin'”.

Unfortunately, the show was cut short. It was only three hours after the concert started when everyone was asked to evacuate “due to approaching severe weather”. It was supposed to run for at least five hours. Journey was one of the few acts who took the stage before the lightning strikes shut down the event. Bruce Springsteen, Paul Simon, Elvis Costello, Maluma, Patti Smith and the Killers weren’t able to perform.

Manilow was halfway through “I Can’t Smile Without You” when he was interrupted by an announced who instructed everyone to “move quickly and calmly to the nearest exits and proceed to your vehicles and protected areas.”