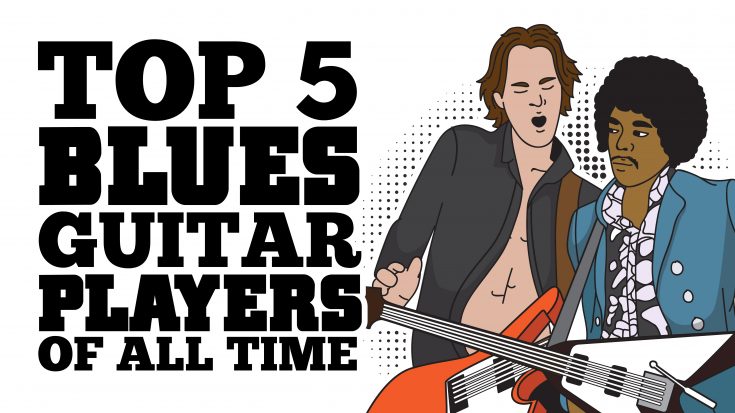 They’ve got the blues!

Without the blues explosion, rock music and all its sub-genres would not be what it is today. It’s just fair to point out that the genre was shaped and influenced by very talented musicians particularly guitar players who paved the way to what we know as rock n roll today. From all the major styles of blues be it Mississippi delta trailblazers to Chicago street, there will always be that blues guitarist that stands out, and it would be remiss not to tip their hat off to their musical influences which for sure would include these top 5 guitarists on our list. These legends of blues guitar are undoubtedly radiating with talent and skill that made them heroes of even the greatest guitar heroes of modern music.

If you don’t know these iconic staple tracks such as “Johnny B. Goode” and “Maybellene”, you don’t know blues. The man behind these blues classics is one of the genre’s pioneers Chuck Berry. Berry created and developed rhythm and blues in the 1940s and 50s that influenced many great musicians in rock n’ roll such as The Beatles and the Rolling Stones. His distinctive guitar style incorporated electronic effects to recreate the sound of bottleneck blues by his rapid fire pentatonic scales he uses in his signature guitar solos. Countless blues and rock guitarists have adopted his quirky techniques, most notably his showmanship on stage particularly his routine that involves hopping on one leg and walking like a duck while rippin’ it out on the guitar. Still strong and creative at 90 years old, Berry has announced he will releasing an album after 38 years.

Almost every accomplished guitarist of today will perhaps mention Eric Clapton as one of their musical influences. The only musician who has been inducted into the Rock and Roll Hall of Fame three times, it is no question that Clapton is one of the greatest guitar players in the history of music. Throughout his career, Clapton has ventures into various musical styles which is a testament to his range as a musician, but his roots evidently remain in the blues. The guitarist, singer, and composer is listed in the genre of blues-rock, He was also fourth in Rolling Stone magazine’s list of the “100 Greatest Guitarists of All Time. His early work with the Bluesbreakers and Cream was innovative and groundbreaking for the genre. His artful string bends and slide guitar melodies based on the pentatonic scale that can be heard in his classic hits like “Wonderful Tonight” and “Tears in Heaven” are noticeably derived from the blues as well.

Very highly revered in the world of rock music, Jimi Hendrix is without a doubt one of the most influential guitarists if all time. His signature styles and phrasings has transcended generations of blues rock music and has been adopted even by his great contemporaries such as Eric Clapton, Jimmy Page, and Tony Iommi. Hendrix’s obvious love of the blues combined with his ability to channel the complexity of his emotions and struggles into his own music have paved way into developing his own signature style of playing. His jazz-influenced blues rock signature involved a dominant seventh sharp and ninth chord that can be heard in the verse of “Purple Haze”. Though his career was only short lived because of his sudden early death at 27 years old, he was a ground breaker of modern rock n’ roll, by taking his instrument, the electric guitar and manipulating unwanted sounds and creating techniques that haven’t been done before during his time. He truly deserved his top spot on Rolling Stone Magazine’s 100 Greatest Guitarists of All Time.

Undoubtedly a trailblazer in blues music, it cannot be denied that B.B. King is one of the greatest blues artists, even one of the greatest guitarists too of all time. This legend has popularly influenced a plethora of outstanding musicians across genres. He is highly acclaimed for his soulfully expressive and passionate guitar playing that is rooted on vibrato and fluid string bending. Most great guitarists of modern music today would testify to B.B. King’s mastery of skill and soul of performance. He not only sings with soul, but he also lets his guitar sing out chords and notes during his solos that are truly unfathomable. From B.B. King originated the cut-to-the-bone phrasing of hitting two notes, then jumps to another string and slides up to a note where he bends the last one. Fairly complicated, rich, robust, and dexterous. It’s only fitting that he is the king.

Stevie Ray Vaughan revolutionized blues as a genre. It is undisputed that he is a master of all these essential genres of guitar playing: rock, blues, and jazz. With his emotionally raw style and staggering stage presence, Stevie came out and ran circles around other great guitarists of his time. He basically brought the blues back to life with his spotless clean phrasing. It’s a shame that we were only graced by his existence for a short period of time, with his career only spanning seven brief but wonderful years before his untimely death. His insane talent on the guitar was definitely unrivaled and powerful that his legend still lives on until today. Highly decorated, Stevie Ray Vaughan Vaughan received numerous music awards even posthumously. He was voted Best Electric Blues Guitar Player in 1983 and 1984, named Entertainer of the Year and Blues Instrumentalist of the Year by the Blues Foundation. He’s also earned six Grammy Awards and ten Austin Music Awards. In 2000, he was inducted into the Blues Hall of Fame and the Musicians Hall of Fame in 2014. In 2015, he was inducted into the Rock and Roll Hall of Fame.It is no wonder why Stevie Ray Vaughan is in fact the greatest blues guitarist of all time,