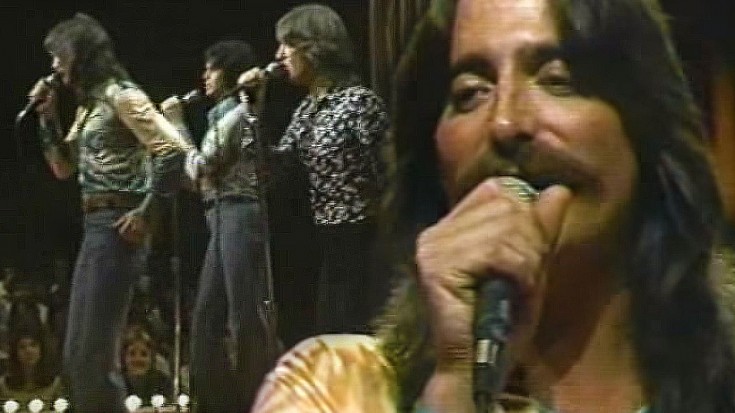 In 1971, Three Dog Night took their own brand of old fashioned love song to the Glen Campbell Goodtime Hour, where flanked by bandmates Danny Hutton and Cory Wells, singer Chuck Negron gave an all-star performance of ‘An Old Fashioned Love Song’ that makes you remember how great it was to be young and in love in the early 70s. The band manages to be both almost unfairly good looking and just as talented, with Danny Hutton even taking a brief moment to get a little silly and make the rest of the band laugh mid-song.

Written in 1971 and featured on Three Dog Night’s album Harmony, ‘An Old Fashioned Love Song’ was inspired by  and written for The Carpenters, who were dominating the charts with their own band of “old fashioned love songs”.

Fun Fact: ‘An Old Fashioned Love Song’ was a last minute addition to Harmony that went on to be one of Three Dog Night’s biggest hits to date.

“I had a date one night with a young lady named Patti Dahlstrom. She was a songwriter. We were going to go out and have dinner. And right before I left for the date I had gotten a phone call that I had a gold record. And I walked into her house, and I said, ‘Well, got a gold record for such-and-such, it just went gold. Kid did it again with another old fashioned love song.’ It just came out of me.

I went, ‘Wait a minute.’ I went over to her piano and I sat down, and it’s the quickest I ever had a song come out of me. And it sounds like it. It’s a really simple song, I wrote it in like 20 minutes. And it was a big hit.” – Paul Williams

If there’s any performance that’ll take you back in time, it’s definitely this one! These were the days when artists got by on talent and actually put in the work needed to be successful, and Three Dog Night was no different with their impossibly tight harmonies, magnetic stage presence, and honest love for their craft.

It’s pretty safe to say that this performance of ‘An Old Fashioned Love Song’ is everything a good old fashioned love song should be – light, fun, and one that you want to relive over and over again!