The Things That Happened Behind Queen’s Epic Live Aid Performance 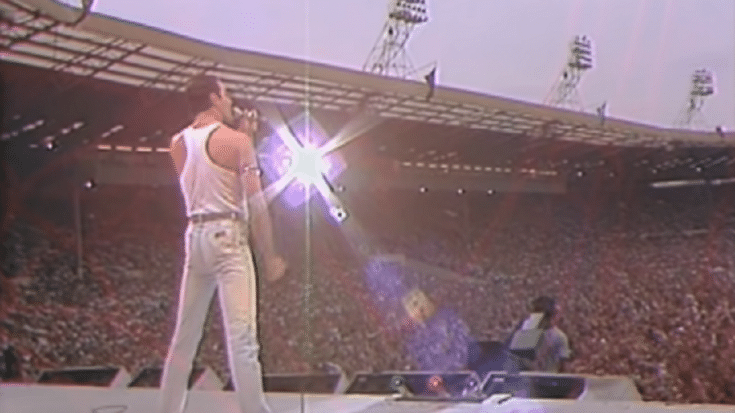 The Stuff of Legend

Ask anyone who has seen Queen’s mind-blowing set at Live Aid in July 1985 and they’ll all tell you the same thing – it was pure magic.

It was merely 20 minutes but it might as well have been longer because time stood still for everyone in the audience and those who tuned in to their TV sets. With more than 75 acts performing including Dire Straits, David Bowie, The Who, Elton John, and Paul McCartney, it wasn’t easy standing out. But Queen made it happen and cemented their spot as rock ‘n roll legends in the process.

The invitation to perform came at a time when Freddie Mercury was starting to get bored of their routine.

“We were all forming a sort of a rut. I wanted to get out of this last 10 years of what we were doing. It was so routine.”

Organized by Bob Geldof and Midge Ure, Live Aid was a benefit show to help with the Ethiopian famine. There were two venues – in Philadelphia and London. Queen were to perform at the Wembley Stadium. It’s a no-brainer why the band agreed to do it – they knew, especially Freddie Mercury, that they were part of something historical.

Queen knew the performers would try their best to upstage and outperform each other – they were entertainers after all. Not one artist had any control over the lights or aesthetic elements on stage but Queen understood it would work on their advantage because as Brian May put it, it’s an “opportunity to show that it’s the music first and foremost.”

Some acts performed two songs. Others had around four to five on their set. Queen went all-out and incorporated six of their greatest hits including the vocal improvisation of “Ay oh!” The transition from one song to another was incredibly but not surprisingly seamless. They mixed in some of their ’70s tracks into the medley.

They followed U2 which also made history that day. Instead of being intimidated, Mercury just went ahead and did what he did best – stealing the show.

Queen kicked off the performance with Bohemian Rhapsody followed by Radio Ga Ga and Hammer To Fall. They then went with their 1980 hit Crazy Little Thing Called Love, then a rousing rendition of We Will Rock You, and wrapped it up with We Are The Champions.

During their performance, it was clear to everyone watching Queen that Freddie Mercury was in his element. He took advantage of the fact that several fans in the audience knew their songs. So instead of them performing and the crowd watching, he went ahead and did a call and response to allow them to somewhat participate.

If there’s anything else they proved during their set, it’s that Mercury was a force of nature. He went back-and-forth playing the piano and guitar, singing, and of course, keeping everyone entertained. To anyone else, it’s a daunting task. But to Mercury, he breezed through it like it’s no big deal.

Needless to say, the world went wild with Queen. Brian May famously commented:

“That was entirely down to Freddie. The rest of us played okay, but Freddie was out there and took it to another level.”

Even dressed simply in faded jeans and white tank top, he became the highlight of the show. No one thinks of Live Aid 1985 without remembering him and how he turned it into his own mini concert. It was as if he lived for that historical moment. His energy and enthusiasm were infectious.

“I remember a huge rush of adrenaline as I went on stage and a massive roar from the crowd, and then all of us just pitching in. Looking back, I think we were all a bit overexcited, and I remember coming off and thinking it was very scrappy. But there was a lot of very good energy, too… Freddie was our secret weapon. He was able to reach out to everybody in that stadium effortlessly, and I think it was really his night.” – Brian May

And aside from helping raise over $120 million for famine relief, Queen was brought to greater heights. And they became extremely popular that they went on to have a 26-date tour the following year.

From Elton John to Foo Fighters, even legendary rock acts acknowledged that Queen walked away that day being one of the greatest rock bands the world has ever known.