The Story Of The Night Jim Morrison Was Arrested On Stage 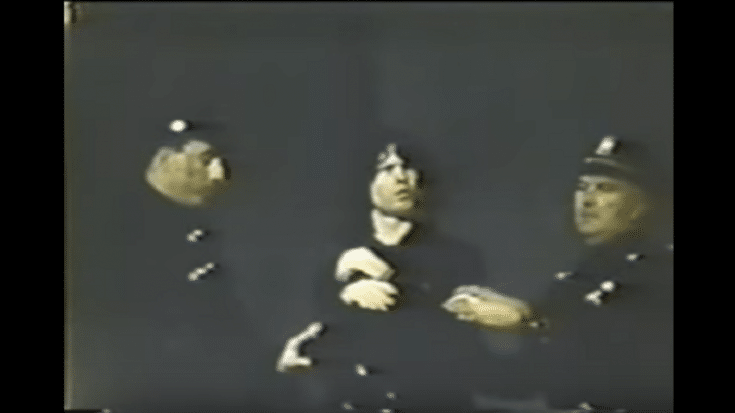 Jim Morrison will always be remembered as rebellious and unpredictable on and off stage. He wasn’t the type who liked being told what to do or what NOT to do – even if it’s a police officer. And that’s pretty much what happened on the night of December 9, 1967 in New Haven, Connecticut.

Prior to the show, The Doors frontman was “making out with a girl” in the shower area backstage – this is according to late keyboardist Ray Manzarek. A local police officer who was there to help provide security for them didn’t recognize the frontman. And so he told the pair to leave the area. This irked Morrison who said, “Eat it.” The officer took out a can of Mace and gave him a warning, “Last chance.” Ever the anti-authoritarian, Morrison challenged: “Last chance to eat it.”

Morrison ended up being maced. The officer was later informed that it was the band’s singer whom he encountered. He apologized but Morrison wasn’t having any of it. Manzarek recalled, “Okay, if you’re famous, you don’t get Maced. If you’re just a kid making out, then you’re gonna get it. So it was like, ‘Hold it, man, it doesn’t work that way.'”

The concert was delayed a little bit so Morrison can recover. But when he took the stage, he launched a verbal attack aimed at the officer during “Back Door Man.” Manzarek said, “There they were. The bulls, the thick guys, thick necks. Making double-time, working night, working a rock and roll show, a lot of fun. Maybe [they would] get to whack a few kids, a few teenagers, if [they could] hit a couple of long-hairs, even better.”

Not content with shouting and cursing, he taunted the officer by singing: “A little blue man, in a little blue hat, a little blue pig.” He also told the crowd, “Because I’m famous, I wasn’t gonna be maced. But I’m just like you guys, if he did it to me, then they’ll do it to you.”

As expected, the cops went to the stage and stopped the show. They arrested Morrison and took him into custody. He was then charged with inciting a riot, indecency and public obscenity. He also caused a mini riot when the angry audience swarmed the streets of New Haven. It lead to 13 more arrests.

The charges were eventually dropped.