The 10 Most Out Of This World KISS Songs 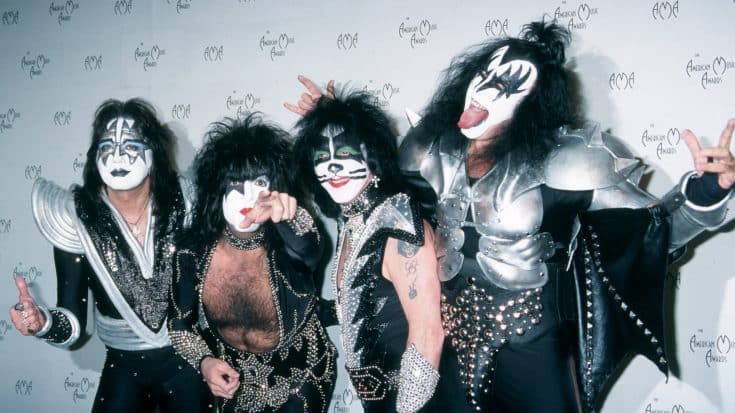 The famous face-painted band, KISS, are in a never-ending quest for world domination. It has led them to wander far from their musical comfort zone on multiple occasions, with occasionally inconsistent and sometimes downright strange results. Nevertheless, the band has made some pretty weird songs. Here’s a chronological look at the 10 weirdest Kiss songs.

“She” (1972 Wicked Lester version, from Kiss’ 2001 The Box Set)
After the rejection of the eclectic self-titled album of Simmons and Stanley’s former band, the Wicked Lester, they ditched their bandmates and recruited Frehley and Criss. Years later, after the formation of KISS, they bought the unreleased Wicked Lester album back from CBS to keep the label from capitalizing on their newfound success. Later on, Stanley admitted they were chasing trends with that song: “If wah-wahs were big, we put it on the album. If ukuleles were big, we had a ukulele track.”

“Goin’ Blind” (From 1974’s Hotter Than Hell)
It is basically a sludgy ballad which casts Simmons as a 93-year-old breaking up with a teenage girl as gently as possible.

“Great Expectations” (From 1976’s Destroyer)
Kiss borrowed heavily from Beethoven’s Sonata Pathetique for this song. They hired an orchestra and the Brooklyn Boys Chorus to further class up the track, but then paired it with some of the most crass lyrics Simmons ever came up with.

“When You Wish Upon a Star” (From 1977’s Gene Simmons)
The song holds two deeper meanings for Simmons, he said watching Disney cartoons helped him acclimate to America after moving from Israel as a young child. While the song’s message inspired him to pursue his musical dreams.

“Just a Boy,” “Odyssey” and “Only You” (From 1981’s Music From ‘The Elder’)
This song is the band’s set out to record a back-to-basics hard-rock album. It bombed in historic fashion, and anybody involved in The Elder’s creation will happily tell you what a big mistake it all was.

“My Way” (From 1987’s Crazy Nights)
This loud pep talk song is a clear low point. If you think that’s still not enough to earn a spot on our weirdest Kiss songs list, imagine playing this song for a fan waiting in line for 1977’s Love Gun tour, then telling them this is what their favorite band is going to sound like in a decade.

“You Wanted the Best” (From 1998’s Psycho Circus)
The weirdest song by far, which features a title taken from the band’s nightly onstage introduction. The lyrics quickly reveal themselves as a straight-up group-therapy session. The band members are trading insults and complaints in the verses, only to explain that they got together to respect their fans’ wishes in the chorus.

“Yume no Ukiyo ni Saitemina” (2015 single, with Momorio Clover Z)
The band’s first-ever collaborative recording teamed up Kiss with the popular Japanese pop group Momorio Clover Z. When the groups switched roles for a Kiss version of the song, that’s where the weird part took place.