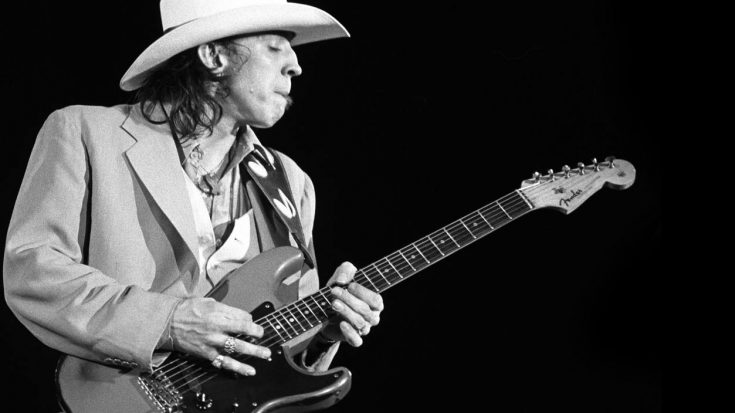 A Look Back On Stevie Ray Vaughan’s Finest Moments

Blues guitar legend Stevie Ray Vaughan burst onto the scene in the early 80s and introduced the MTV generation to a level of guitar playing they’d only heard about as legend, and reignited our love for he and others like him who had an almost supernatural talent for the guitar. Here’s a look back at the top 10 moments that defined Stevie Ray Vaughan as one of the greatest guitar players the world has ever seen!

It’s not every day you see your hero joined by one of his heroes, but in 1986 that’s exactly what we got when Stevie joined forces with legend Lonnie Mack for this rowdy performance of ‘Wham’.

The Vaughan brothers were thick as thieves, so it was always fun to see these two perform together – especially on a song like ‘Pipeline,’ on a double necked guitar no less!

Written for his wife Lenora Bailey, ‘Lenny’ is a gorgeous Hendrix-inspired instrumental piece. It’s one of the most gentle pieces Stevie ever wrote, but his technical skill is absoluitely unmatched!

Inspired by the Lightning Hopkins song ‘Hopkins Sky Hop,’ ‘Rude Mood’ is an incredibly quick blues shuffle known for its technical difficulty. Of course, Stevie made it look and sound absolutely effortless.

One of our favorite moments in Stevie history came with his 1990 performance of ‘Pride And Joy’ on MTV Unplugged. He’s rocking an acoustic 12-string, and somehow it’s even better than his electric performance of the same song!

5. Stevie Rolls Out Of Bed And Into Soundcheck…And Sounds Amazing (1986)

Most guitarists need several hours to wake up, warm up, rehearse, and sound amazing. Stevie Ray Vaughan literally had to roll out of bed and into soundcheck – end of story.

A string breaks in the middle of ‘Look At Little Sister,’ and Stevie doesn’t break a sweat – and proceeds to change his guitar right in the middle of the song. A god among men (with a great guitar tech!)!

The only man who ever came close to Jimi Hendrix’s greatness, Stevie’s 1987 rendition of ‘Voodoo Child’ is absolutely flawless.

Stevie’s most iconic piece, ‘Pride And Joy’ accurately sums up his legacy as one of the greatest blues guitarists in the world.

Stevie’s debut offering to the world in 1983 came in the form of the slow blues classic ‘Texas Flood,’ a fantastic combination of everything that could come to define him. From his intensity to his deliberate note choices, at 29 years old, Stevie Ray Vaughan was clearly on his way to greatness.