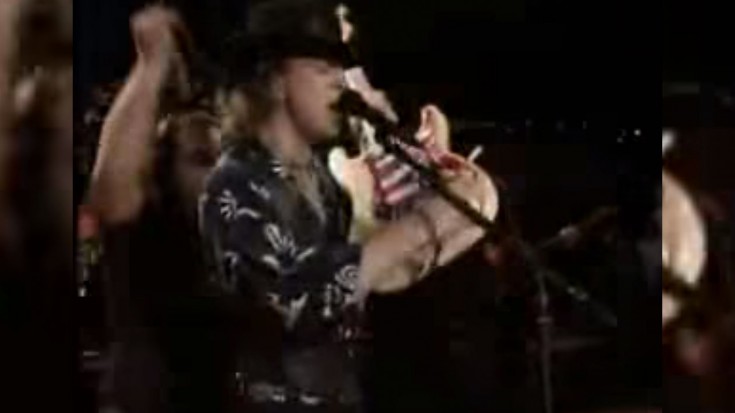 Rene Martinez Swoops In Mid-song For One Epic Save!

With this guitar-heavy song, chances are, the strings will very much likely break. But of course, it’s Stevie Ray Vaughan so there’s no need to stop. Here’s something everyone can learn when you break a string on-stage. And if I’m just listening to this, I wouldn’t really know something was up! He swapped the guitar WITHOUT missing a beat. Holy smokes!

Roadie tech Rene Martinez did quite probably the SMOOTHEST guitar swap I’ve ever seen — totally seamless. And SRV was singing the entire time. What a gem!

Martinez, a classical and flamenco guitarist who got his start in the repair business painting cars and refinishing violins, was initially hesitant about going on the road with Vaughan.

This clip only proved that Martinez was indeed an integral part of SRV’s team especially when they were hitting the road. It’s incredible. No matter how many times I watch this, I still get amazed!

Stevie Ray’s playing especially in concert was, without question, touched and shaped by Rene’s work. From his attention to detail in tuning Stevie’s guitars, to his ingenious methods of solving some of Stevie’s biggest problems (like broken strings and tremolo bars), Rene Martinez proved to be one of the most important catalysts of Stevie’s talent.

Martinez was absolutely a master when it came to fixing and maintaining SRV’s most prized guitars!