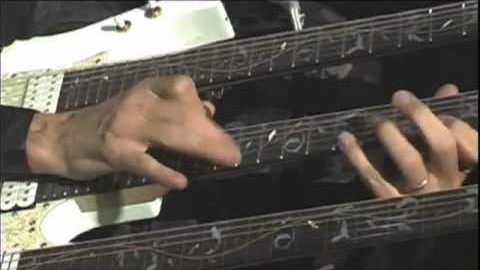 Steve Vai Is Like A Mythical God-like Metal Creature

If you are a musician, and more specifically a guitarist, you know how gangster Steve Vai is. No, let me scratch that: you know how insane Steve Vai is on the guitar and how much he melts people’s faces off. Sometimes you can’t even gather your thoughts after what you see him do on the axe. There might not be another person that can even touch him, except for maybe Yngwie Malmsteen and a couple others. But that’s a whole other story.

So let’s talk about the monster of a guitar that he’s playing in this clip. It’s got 3 necks. It is believed to be a JEM Tripleneck.

Here he is playing back in 2003 at The Fillmore Auditorium in Denver along side a few other musicians. Just performing “I Know You’re Here” very casually with legs crossed, but shredding it up without even trying like he always does. Incredible. Oh if only I could get private guitar lessons from Steve!