She’s Only 12, But What She Does With This Mötley Crüe Classic Is Absolutely Killer 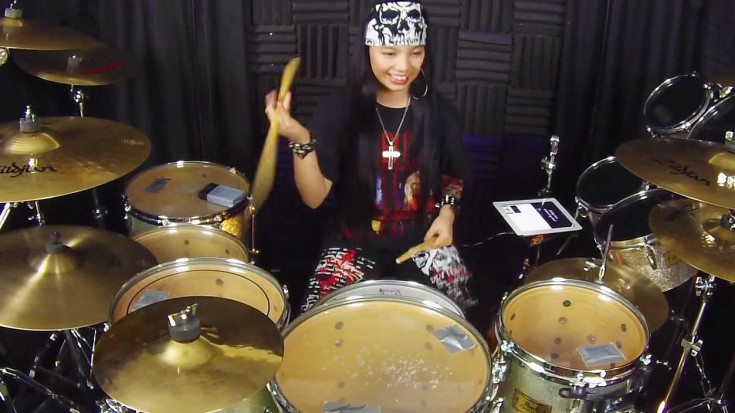 At 12 years old, drum prodigy Alexey Poblete has made a career out of her killer drum covers that range from Rush and KISS, all the way to 80’s hair band Mötley Crüe, showing her versatility as a drummer and her broad range of influences behind the kit. This cover of Mötley Crüe’s ‘Kickstart My Heart’ is far and away the most fun cover Alexey’s ever recorded – between that mile wide grin on her face, her stick twirling and awesome outfit that remind us of a young Tommy Lee, it’s undeniable that Alexey has just as much fun playing as we do watching her!

Fun Fact: Alexey’s drum influences include Tony Royster, Jr., John Bonham, and KISS drummer Eric Singer, and she was the 2013 champion of the Hit Like A Girl Drum Contest.

Having seen her earliest videos where she’s almost a little shy in terms of the force she uses when playing, this rendition of ‘Kickstart My Heart’ is a breath of fresh air and a wonderful glimpse into Alexey’s evolution as a drummer – these days, she’s not nearly as afraid to channel her inner glam rock drummer and deliver a cover that would have even Tommy Lee tipping his hi-hat in tribute to this young lady!

“That was a song I had written very quickly and had brought into rehearsal. I thought it was a throwaway, something that would belong on Too Fast For Love. It just really took on a life of its own and fit on the album a lot better than it should.” – Nikki Sixx

It may be a fan favorite but there’s a dark backstory to this hit track – it’s when Nikki Sixx almost died and the paramedics had to revive him and therefore “kickstart his heart.” Still, Alexey pulled it off and she looked like she’s having so much fun with the cover too!