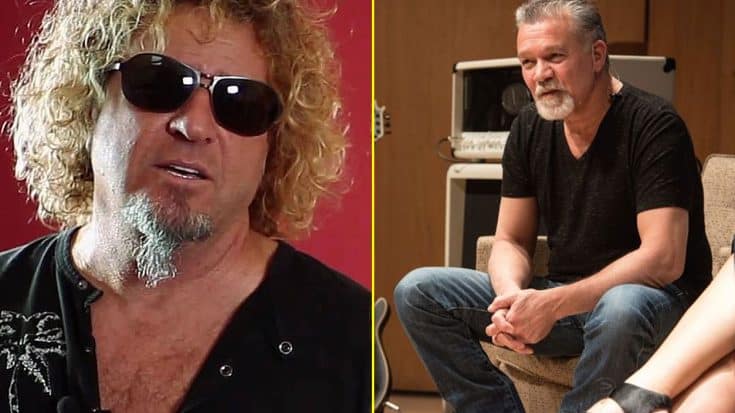 Here’s A Hint: It Has Nothing To Do With Money

If you’ve been holding out hope for Sammy Hagar to eventually rejoin his former Van Halen bandmates, don’t hold your breath. Busy with his current project Chickenfoot and various successful business ventures – including Santo Mezquila, the world’s first blend of mezcal and tequila – Sammy’s dance card looks pretty full for the time being. Then, there’s also the tricky situation surrounding his relationship with Eddie and Alex Van Halen; despite exchanging pleasantries with Eddie on social media for the guitarist’s birthday, Sammy says that that’s where it stops:

“Let’s put it like this — when it came to my birthday, I didn’t get a message,” Hagar notes, “so obviously that camp, him and Al, still have some kind of trip against me.”

Naturally, given his history with Van Halen he’s not too keen on putting himself through the anxiety of worrying about whether he’ll get along with Eddie and Alex or risking being “stabbed in the back again or something,” but surprisingly, there’s still a glimmer of hope. When asked what it would take for Sammy to ever rejoin Van Halen, Hagar laid out his terms; money isn’t high on the list of priorities, but he would only work with the original Van Halen lineup that includes both David Lee Roth and bassist Michael Anthony.

Everybody’s saying, ‘Well, what would it take?'” Hagar says. “For me, no money, man. I don’t need money. I would do that for the fans and give the money to food banks or something. I’m not sure anybody else would agree with me, but that would interest me enough to sit down across the table from everybody and work that one out.”