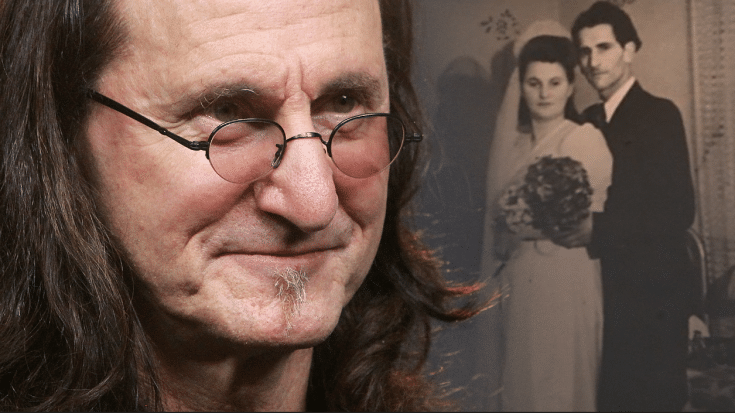 “How They Survived In There, I Don’t Know.”

Yesterday’s International Holocaust Remembrance Day was a day for humanity to look back on one of the darkest chapters in modern history and vow to never, ever let it happen again.

For Rush frontman Geddy Lee, though, it’s a day of quiet reflection; the Holocaust is part of his family history, woven into his DNA by way of loved ones who saw that evil up close, stared it dead in the face and by the grace of God, survived it. His parents, Morris and Mary Weinrib, were teenagers when they arrived in Auschwitz after surviving the ghetto in their hometown Starachowice, Poland and, despite the constant threat of death looming over them, fell in love.

They were separated some time later when Mary was transferred to Bergen-Belsen and Morris to Dachau, but in an incredibly lucky twist of fate found each other in a displaced persons camp four years later where they married before emigrating to Canada.

These photos of my mom and dad were taken c.1946 on their wedding day and shortly thereafter at the Bergen-Belsen Displaced Persons Camp in Germany where they were living after their liberation. On Sunday (tomorrow), Q104 will be airing an interview I did with Shelli Sonstein for this Sunday’s International Holocaust Remembrance Day. It’ll air at 7:00am ET Sunday and the video of the conversation will be posted on YouTube shortly afterwards. A podcast version will also be available starting on Sunday morning: “Sonstein Sessions,” which can be found on the Q104.3 website and on the iHeartRadio App. #neverforget #holocaustremembranceday #neveragain

To this day, Geddy has no idea how they survived, something he recalled to Q104.3 New York’s Shelli Sonstein during an interview in honor of International Holocaust Remembrance Day.

“My mum and dad were in Auschwitz for a couple of years,” revealed Lee. “How they survived in there I don’t know. My dad was transferred out of Auschwitz before my mother was.”

Geddy Lee of Rush joins @shellisonstein this weekend on #Holocaust Remembrance Day to tell his family's incredible story. Listen Sunday at 7 AM for the full interview. Both of Geddy's parents were imprisoned at Auschwitz during #WorldWar2. As he tells it, every day was a coin-flip as to whether they would go to work or be killed. #neverforget #holocaustremembranceday @geddyimages @rush

Lee continued, sharing the incredible story of how his maternal grandmother saved herself, his mother and aunt from the gas chambers and certain death, keeping their family alive long enough to see liberation from the Allies.

“[The soldiers] would line them up every day. They would go ‘left, right, left, right.’ If you went to one direction, you went to the gas chambers, if you went to the other direction, you went to work. So my grandmother would rearrange them in the lineup so they all went in the same direction. She believed that if they were all going to perish, they would perish together, and if they were all going to survive, they would survive together. My grandmother was an amazing person, she kept them alive throughout their time in the camps.”

Despite the horrors of what she’d experienced, Geddy’s mother never tried to hide or sugarcoat the family’s story from him or his siblings. As a child, her stories gave Geddy nightmares – after all, how could a child’s mind possibly conceive and reconcile that kind of horror? – but at 65, he’s grateful that Mary, now 92, didn’t hold back.

“I remember my mother constantly reinforcing the idea that we had to keep the family together because these terrible things can happen,” Lee says, sharing that knowing the ugly truth of the Holocaust helped inform his opinion of the world and give him a much more nuanced perspective.

What an incredible, heartbreaking story. Check out the rest of Geddy’s interview with Shelli Sonstein in the video below – it’s absolutely mindblowing.