Robert Trujillo Introduced These Two Rock Legends To Each Other, And It Changed Music Forever! 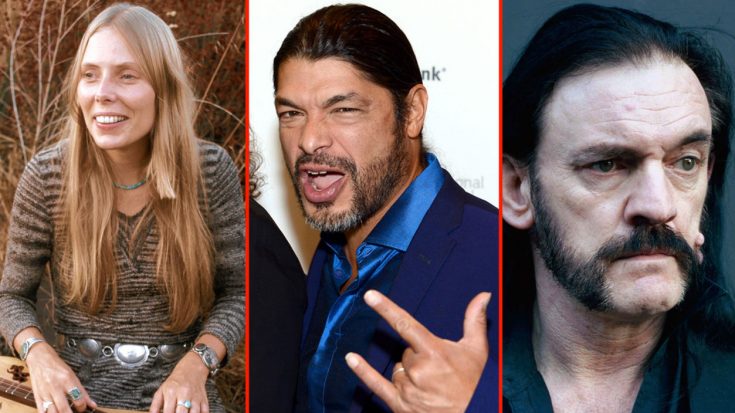 They were both heroes of his!

Every single musician who has ever made it, always had people they looked up to. Whether it be a particular musician, songwriter, or producer, the music industry is full of people who others can look up to for inspiration and guidance.

Two people that Metallica bassist Robert Trujillo looked up to were Lemmy Kilmister and Joni Mitchell. Lemmy is the legendary bassist for Motörhead, who passed away in late December of 2015. Joni is a legendary songwriter, singer and painter. Both inspired Robert, and little do people know, but Robert was the one who actually introduced them both to each other! Lemmy and Robert were at a tribute show for The Who’s John Entwistle and Keith Moon. Robert spotted Joni, and introduced her to Lemmy, and the two ended up instantly connecting!

“I was at the House of Blues in Hollywood and there was kind of a tribute show to John Entwistle and Keith Moon of The Who and a bunch of us were there. I had invited Joni Mitchell because we’re friends. I didn’t think she was going to show up. So I’m out there in front of the House of Blues on this bench sitting with Lemmy and he’s doing what he does, smoking a cigarette and then I see Joni. Joni comes over, sits next to me, “Hi Robert!” and of course I introduce them.

This is interesting, I have two of the most iconic rock ‘n’ roll heroes next to me, hands down that are true to their art and they’re both chainsmokers. I’m sitting in between them and I’m like, “Uh, Joni, I’d like to introduce you to my friend Lemmy.” She goes, “Oh, hi Lemmy!” And he looks at her almost like Clint Eastwood — taking a drag on the cigarette, exhales this mass of smoke, she does the same thing. He looks over and he’s like, “Joni, what f—ing chords were you playing on ‘Court and Spark’?” It was like, he’s a fan of Joni Mitchell and it was just incredible. Suddenly, they get into this discussion of chords and guitar technique and tuning. I’m sitting in the middle inhaling enormous amounts of smoke from Joni Mitchell and Lemmy from Motorhead and I’m just going, “This is heaven. I couldn’t be in a better place right now. I don’t smoke, but right now I’m inhaling magic.”–Robert said.

That’s a pretty crazy and surreal moment for Robert! imagine being the one who introduced both of your legends!? It must have felt great for Robert to know that they are fans of each other’s work, and connected right off the bat! Check out a video of Robert telling the story down below!