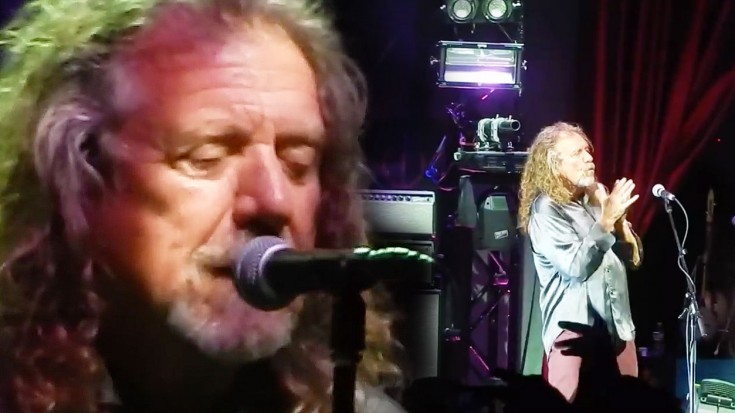 Yes, over the years Robert’s voice took a toll with surgery, external factors and age, but we are absolutely blown away by this “Going To California” performance just this year! Just this past summer, Robert toured the nation, proving to the world that nothing has changed and he is better than ever.

“Spent my days with a woman unkind, Smoked my stuff and drank all my wine. Made up my mind to make a new start, Going To California with an aching in my heart….”

“Going To California” is one of our all-time favorite songs of Led Zeppelin and in general, but to hear him hit some of the notes that he did so long ago just makes happier than you will ever know. Inspired by Joni Mitchell’s “California,” Page and Plant originally started writing the lyrics about an Earthquake but apparently got sidetracked and ended up targeting a specific type of woman that robs men of all their worth.

Interesting Fact: When performed live, after the lines “To find the queen without a king they say she plays guitar and cries and sings,” Plant would often say the name “Joni.”

No one is a bigger Robert Plant fan than we are, so to see him perform such a stunning cover at the ripe age of 67 is a gift of which we are not worthy. The fact that he is still making music and singing Zeppelin classics warms our hearts- we could listen to him forever.

Enjoy this awesome live performance of Plant in Vegas in May 2015 and see his lasting talent for yourself!

Spent my days with a woman unkind, Smoked my stuff and drank all my wine.
Made up my mind to make a new start, Going To California with an aching in my heart.
Someone told me there’s a girl out there with love in her eyes and flowers in her hair.
Took my chances on a big jet plane, never let them tell you that they’re all the same.
The sea was red and the sky was grey, wondered how tomorrow could ever follow today.
The mountains and the canyons started to tremble and shake
as the children of the sun began to awake.

Seems that the wrath of the Gods
Got a punch on the nose and it started to flow;
I think I might be sinking.
Throw me a line if I reach it in time
I’ll meet you up there where the path
Runs straight and high.