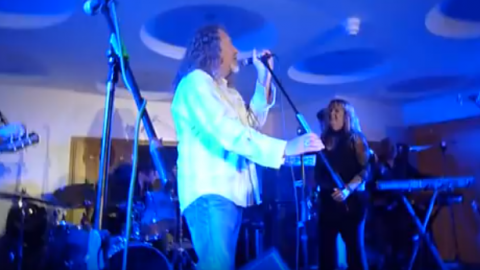 You keep on reading about famous musicians crashing band’s concerts or live shows. That’s actually really awesome. But what if it’s Robert Plant? Yes, the one and only iconic Led Zeppelin frontman. At Hereford’s Left Bank last Saturday April 30, Robert gave a surprise performance during a gig by the Deborah Bonham Band (yes, it’s John Bonham’s sister). John is the legendary drummer and bandmate of Robert, by the way. You know, the one with the ultra fast bass drumming and also famous for his distinctive sound.

See here, can we just take a moment to feel some serious envy at the audience? Come on now. It’s not everyday that a HUGE name in rock ‘n roll shows up like this. Anyhow, Robert rocked out to two tracks: a cover of Shakin’ All Over by Johnny Kidd and The Pirates and a Led Zeppelin classic. For sure, everyone had a great time — Robert and Deborah even had a duet! That’s probably one of our favorite moments.