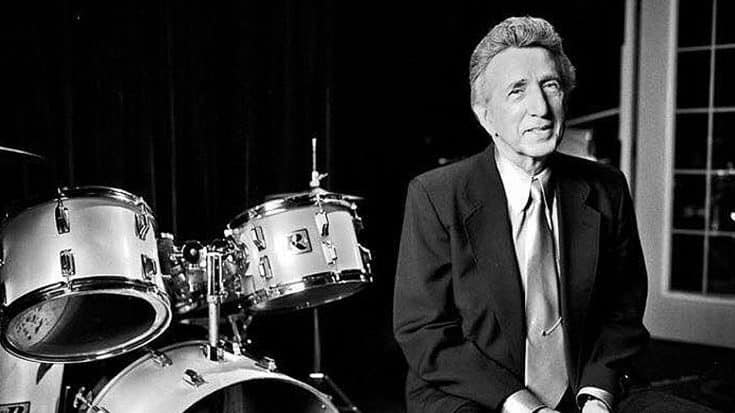 A Sad Day In Rock History

It is with the saddest of hearts that we have just learned that legendary drummer D.J. Fontana, longtime drummer for Elvis Presley, has passed away at the age of 87. The news was broken late last night by his son David in a brief Facebook statement.

I told everyone that I would keep you posted. My Dad passed away in his sleep at 9:33 Tonight. He was very comfortable…

As of right now, we do not know the cause of death, but as stated in David’s Facebook statement, he was “very comfortable with no pain”.

Born March 15, 1931, Dominic Joseph Fontana got his start as an in-house drummer for Louisiana Hayride, a country radio station turned television show, on their Saturday night broadcast which is also where he was first noticed by Elvis Presley whom hired him soon after.

D.J. Fontana’s remarkable 14-year tenure as a drummer for Elvis Presley included drum work for some Elvis’ most iconic songs such as “Hound Dog”, “Heartbreak Hotel”, “Jailhouse Rock”, and “Don’t Be Cruel” just to name a few.

To this day, he is regarded as Elvis’ most important drummer and even in death he will be remembered as one of music’s most important percussionists.

We are extremely saddened to hear about the passing of legendary drummer D.J. Fontana. The band is all back together now?

A real legend passed away last night: ELVIS PRESLEY's drummer D.j. Fontana. He pioneered the backbeat of rock and…

D.J. Fontana's Wife Karen shared this evening that D.J. has passed away. He was Elvis' Drummer and a true gentleman. I…

The world suffers a huge loss today of rock and roll Hall of fame drummer D.j fontana.. Nickname Tennessee thunder.. Most known for playing with Elvis Presley from 1954 to 1968.. He literally was the beat behind the king….. I had the honor of playing many shows with him ….here is one.. Me D.J Fontana and the ambassadors Live in Bolton arena in the UK in front of 15000 people… Rest in peace my friend..TCB

So sad to hear that D.j. Fontana has passed. D.J. Was Elvis’ original drummer from 1954-1968 and helped create the sound…

So sad to hear that DJ Fontana passed away last night in his sleep. He was Elvis Presley’s legendary drummer. I had the…

Elvis' original drummer D.J. Fontana has passed away at the age of 87. Condolences to Karen and the entire Fontana family. D.J. had been gracious over the years providing the club with photos and drumsticks as charitable items for our auctions. #AlwaysElvis #ElvisHistory pic.twitter.com/aRhus5c5BV

D.J. Fontana (Elvis’ original drummer) passed away last night. @johnfrederickyoung and I had the absolute pleasure of meeting D.J. at his home in 2010. We got to touch the original drum set that was used on Ed Sullivan, Milton Berle, etc. He enlightened my endless amount of questions and was so cool. He even still carried a comb in his shirt pocket. A legend on his own. Now the full Elvis band has reunited in that glorious house band in Heaven! #djfontana #elvis #drummer @elvis

So sad to hear about the passing of DJ Fontana, Elvis’ original drummer. I’ve had the privilege of getting to know DJ over the years, and had the chance to shoot him with his original @gretsch kit that he’d used on all of the classic Elvis tunes like “Hound Dog,” “Jailhouse Rock,” and countless others. Rest In Peace, DJ, and thank you for everything. . . . . #djfontana #elvis #elvispresley #gretsch #gretschdrums #drums #drummer #drummers #nashville #rocknroll #rockandroll #rockphotography #rockphotographer #musicphotography #musicphotographer

I’m so saddened by the news of DJ Fontana’s passing. DJ was Elvis’ drummer in the earlier years on some of my favorite rock n roll songs like “Blue Suede Shoes,” “Return to Sender,” and so many more… I had the pleasure of working with @shanahanphoto on a photo shoot with DJ and his Gretsch drum kit from his touring days with Elvis, and the stories and memories DJ shared are sentiments I will never forget.

It simply goes without saying that Fontana was, is, and always will be a pillar in the world of music. Simply put, he kept the meter for a man who helped reshape music, as we know it today and remained incredibly influential throughout his entire career and always will. Our thoughts and prayers go out to all of his family, friends, and fans during this difficult time. RIP D.J. Fontana. You will be forever missed.