Remember The Printer Scene From ‘Office Space’? Yeah – That’s How We Feel About 2016 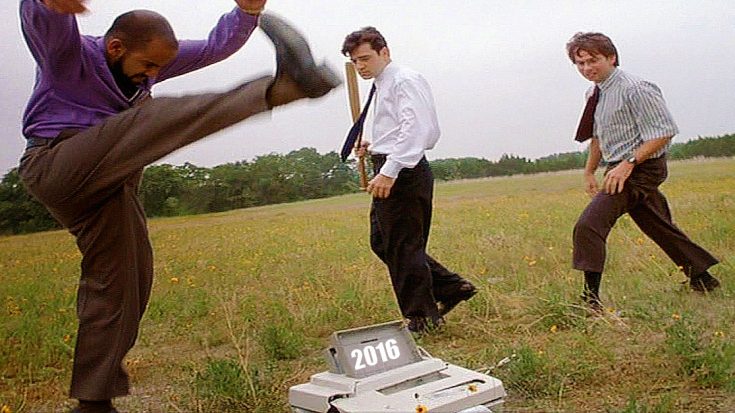 Remember that scene in Office Space where the guys take their office’s infuriating printer to an open field and go to town on it with feet, fists, and a Louisville Slugger? Yep – that’s how we felt about the year 2016.

Harambe, a nasty election, viral challenges that refused to die and a host of rock and roll’s best and brightest taken from us one after another after another, it seems like just as we thought the year couldn’t possibly get any weirder, 2016 saw it as a challenge and upped the ante.

2016, you were a dumpster fire of epic proportions on quite literally every level imaginable and in less than 24 hours we’ll clink glasses and celebrate as you slink back to the depths of hell you crawled out of and finally, mercifully, give way to a brand new year. A new year that we hope holds infinitely more joy, more unity, more love, and more fond memories than the one we’re about to say goodbye and quite frankly, good riddance to.

In the meantime, check out the video below and imagine that you’re Ron Livingston, 2016 is the printer, and you’re about to finally teach it a lesson – you don’t take David Bowie, Prince, and Princess Leia and get away with it!

From our family at Society of Rock to yours, Happy New Year and here’s to a kinder, gentler 2017!