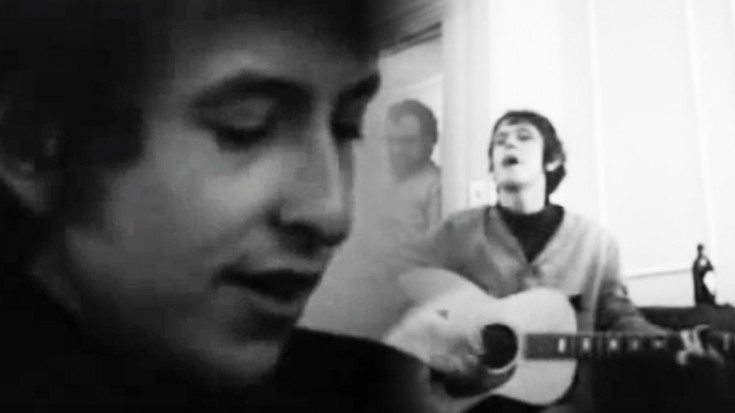 From documentary Don’t Look Back, two of the greatest artists of all time come together to jam out and enjoy one another’s music in an intimate hotel room setting, painted in black and white.

With this extremely rare, intimate footage of Dylan and Donovan Leitch, we see a side to them we have never experienced before as real people enjoying music. Playing “Sing A Song For You,” at only 19 years of age, Donovan shines on the acoustic guitar with his stellar and completely natural vocals with Dylan listening intently to the words and melody saying, “hey that’s a good song man!”

Interesting Fact: There has been much speculation about the real life identity of “Baby Blue”, with suspects including Joan Baez, David Blue, Paul Clayton, Dylan’s folk music audience, and even Dylan himself.

After Donovan is finished serenading the small group of men, 26-year-old Dylan takes a shot at the hot seat with hit “It’s All Over Now, Baby Blue” and it is more than glorious. From 1965 Bring It All Back Home album, the song was written by Dylan and performed once acoustically on January 13, 1965 and a second time, semi- electrically on January 14 before its release in March 1965.

People speculate between which artist performed better or sounded better, but that’s not the point here at all. The only focus when viewing such rare footage like this is to cherish our ability to have it available at our fingertips and watch the two men enjoy and experience each others’ talent and musical charisma.