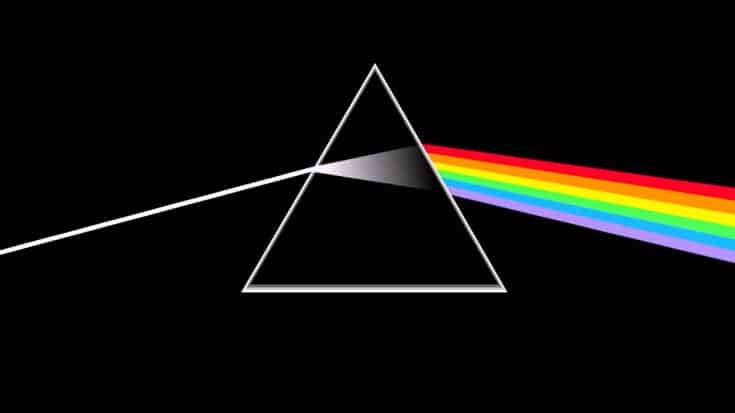 Dark Side of the Moon’s Turns 45

Try to imagine Pink Floyd’s Dark Side of the Moon without its iconic album art – a prism spectrum. It’s okay, I’ll wait.

That’s because Pink Floyd weren’t able to use their original vision for the album’s cover – a disappointment in the moment, but one of the best things to ever happen to them in the long run. Created by English graphic designer George Hardie, and Hipgnosis’ Storm Thorgerson and Aubrey Powell, the prism spectrum that’s graced the cover of Dark Side of the Moon and quickly became synonymous with Pink Floyd wasn’t actually the artists’ first choice.

As the story goes, Hipgnosis’ love for Marvel comics led to a suggestion for an album cover: Jack Kirby’s Silver Surfer, a character they felt fit with Pink Floyd’s overall vibe and sound. Powell told Rolling Stone, “…we liked the image of a silver man, on a silver surfboard, scooting across the universe. It had mystical, mythical properties. Very cosmic, man!”

Disappointment and reality set in, however, as Hipgnosis realized that they’d never be able to get the rights to Silver Surfer. “We never would have got permission to use it,” Powell admits, but hey – cool idea, right?

A childhood friend of Pink Floyd guitarist David Gilmour, Thorgerson came through with a brand new design – a simple prism spectrum against a black background, light turning into color – that blew their original concept out of the water. For David Gilmour, Roger Waters, Rick Wright and Nick Mason, there was never any doubt that this was the design they’d been looking for.

“When Storm showed us all the ideas, with that one, there was no doubt,” Gilmour told Rolling Stone in 2003. “It was, ‘That is it.’ It’s a brilliant cover. One can look at it after that first moment of brilliance and think, ‘Well, it’s a very commercial idea: It’s very stark and simple; it’ll look good great in shop windows.’ It wasn’t a vague picture of four lads bouncing in the countryside. That fact wasn’t lost on us.”

The world agreed with Pink Floyd; more than 45 years later, Thorgerson’s design for Dark Side of the Moon is hailed as one of the greatest album covers of all time, and George Hardie’s ability to bring his design to life was second to none.

If you read no other facts about Dark Side of the Moon on its 45th birthday, we’re awful glad you read this one – now go and celebrate with “Money,” live at Live 8!