Neal Schon Says Journey Is Being Forced To A Contract 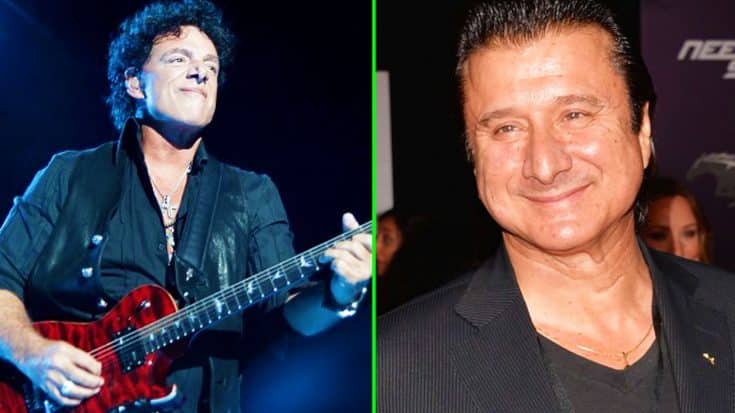 Neal Schon recently said that Journey‘s current dispute with their former vocalist Steve Perry is the result of being forced into a contract they didn’t want to sign.

Not long ago, Perry filed a petition to cancel trademark registrations filed by his former bandmates for 20 Journey songs including some of their hit classics. He claimed that his former bandmates Schon and Jonathan Cain couldn’t move forward under the terms of a partnership contract that requires “prior, written unanimous consent of all partners in each instance.”

This was condemned by Schon saying that Perry’s claim is “total crap.” Schon, being so vocal about it on social media recently said that this event was the result of not agreeing with Perry when the singer “forced upon us all to sign … 10 minutes before we were to go on in Hawaii at a string of five sold-out shows. We had played the first two, then our manager [the late Herbie Herbert] came to us, stating Steve Perry was not going to go on without us signing. Herbie claimed he didn’t know what else to do, so he suggested we sign. We did sign, but I will say under duress and not having any time for any other legal to look at it.”

After that incident, Perry left the group but retained voting rights through their management company. Perry “was present at the board of directors meeting. No one thought I was there, but while being represented by my attorney, I was there listening on the line,” said Schon.

Schon also recalled that Perry’s “voice was heard by myself and all that attended, voting me off the board.” During the meeting, Schon said, then-drummer Steve Smith “voted himself in as president” while then-bassist Ross Valory “voted himself in as secretary, and they all threw myself under the bus as well as Jon.”

“Bottom line, all these years have gone by, then I found out our music wasn’t even trademarked, nor the name until 2005 and I trademarked the rest of everything in 2020,” Schon continued.

“So out of all the attorneys, accountants, manager[s] we’ve had, do you think just one of them could have taken care of business and protected the band? I’m going to take a wild guess and say that they all knew the differences between songwriting, copyright, and ultimately the trademarks to everything,” Schon added.

“Just a little something to think about, friends.” said Schon upon ending his statement and signed off as “Neal Schon, founder and now manager of the band Journey.”