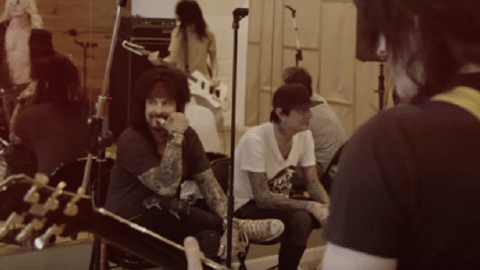 We’re Excited For This!

It doesn’t sound like the best idea when you just read about it. But once you listen to their cover, it will all make sense.

In anticipation for their upcoming Netflix movie “The Dirt” which will be released this March 22, they recently dropped the official music video for one of the songs in the soundtrack “The Dirt (Est. 1981)” feat. Machine Gun Kelly. There’s a total of 18 tracks and it features some fan favorites such as “Girls, Girls, Girls” and “Dr. Feelgood.”

But perhaps one of the things that piqued our curiosity is the band’s cover version of Madonna’s classic pop hit “Like A Virgin.” Interestingly, Nikki Sixx revealed the idea came upon him while he was walking his dogs.

“When my mind’s open like that, these ideas pop in. And [it] popped in my head, and I sort of, like, looked up, as if to laugh at God, and went, ‘You’re pretty funny.’”

It all came together when Mick Mars added a bit of Metallica to the mix.

“[A part of the song that] does this little gahnk-guh-guh-guh-guh-guh-gahnk that Mick does, a bit of a nod to Metallica because [when] Metallica heard the Dr. Feelgood album, [they] used Bob Rock to make the Black Album. It’s kind of a nod back to those guys because we were workin’ with Bob again.”

Sixx also mentioned that he’s not certain whether Madonna has already heard their cover but that “She will soon, I imagine.” He’s also thinking of getting her in their video. Now that would be awesome!