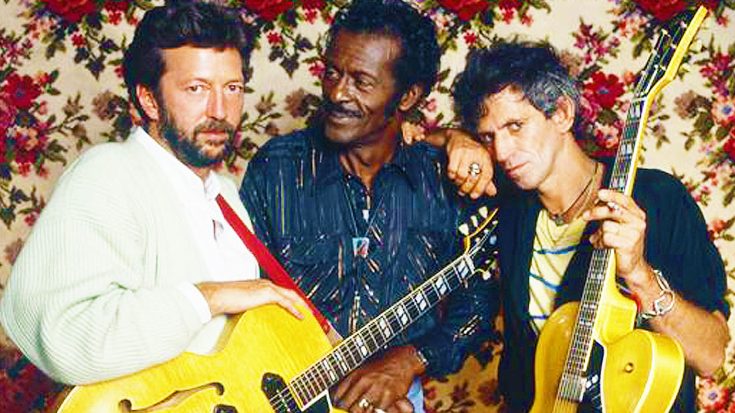 Today, would have been Chuck Berry’s 91st birthday! Charles “Chuck” Edward Anderson Berry was born on October 18th, 1926 in St. Louis, Missouri. He was born into a middle-class family, which allowed him to take guitar lessons at a very young age. In 1941 at the age of 15 years old, he gave his first public performance at his high school. In 1948, he married Themetta “Toddy” Suggs. Two years later, the couple gave birth to a daughter Darlin Ingrid Berry, and Chuck began working various jobs to support his family. On the side, Chuck performed with local bands and nailed down his playing skills with additional lessons from Ira Harris, and modeled his showmanship after blues legend T-Bone Walker.

Chuck then began to make noise in the music world, and in 1955, traveled to Chicago to meet with Muddy Waters. The rest was history. From there, he established himself in the rock n’ roll world, writting instant classics like “Johnny B. Goode,” “Maybellene” and “Roll Over Beethoven.”

Unfortunately, Chuck passed away earlier this year on March 18th, 2017, but his legacy will live on forever! So, in honor of what would be this late-legend’s birthday, we’re throwing it back to when he teamed up with Eric Clapton and Keith Richards for the ultimate jam session! The video pretty much speaks for itself: it’s 11 minutes of sheer rock n’ roll goodness, with all three legends trading solos, improving lyrics, and just having a blast! Definitely a landmark moment in rock history, right here!

Enjoy the clip for yourself down below, and join us in wishing Chuck Berry a very happy 90th birthday! Here’s to many more!