Kirk Hammett Snatched Something From Peter Green To Use For The New Metallica Album! 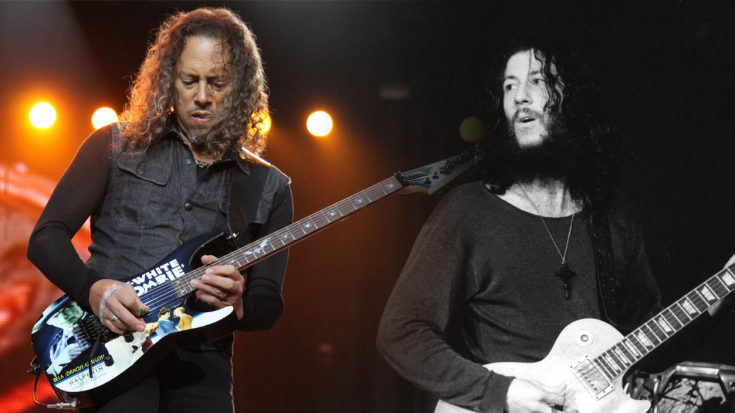 From One Icon To The Other!

If you know anything about Metallica‘s lead guitarist Kirk Hammett, then you’ll know that he is avid collector of all things guitar and old movies. He has also built up quite the collection, too! So it should be no surprise when you hear that Kirk Hammett acquired yet another vintage guitar, correct? Well, it may surprise you to hear just from whom he acquired this guitar from!

The guitar we’re referring to is a 1959 Les Paul, but what makes this guitar so special is who it used to belong to. At first, it used to belong to former Fleetwood Mac guitarist Peter Green. Then, after he fell off the radar it was acquired by legendary guitarist Gary Moore. Kirk Hammett recently sat down with Guitarist Magazine to talk about it. Here is some of what he had to say.

“It’s really weird because I didn’t pursue it like I have pursued other guitars in the past – really aggressively going after certain guitars and working out deals. This is more just a situation where I was sitting in my hotel room in London one day and I texted a friend of mine and he said, ‘Oh, I have a guitar I wanna show you,’ and I said, ‘Okay, sure. Bring it over’. And when he says he has a guitar that he wants to show me, more than likely it’s a vintage guitar and even more likely it’s a Les Paul Standard because this guy’s known for that type of guitar. So he came over with this other guy and they also brought over a vintage Marshall combo. I plugged it into the vintage Marshall amp, turned it up and played it. After about 30 seconds, I thought to myself, ‘Wow, this is not your standard Les Paul’ and I went to the middle position, because, you know, that’s the revered sound and I started ripping out and I thought to myself, ‘Holy shit, this is a total contradiction. It sounded like an incredible Les Paul in the bridge position and in the neck position, but when you put it in the middle position it kind of sounded like a Strat through a 100‑watt Marshall stack!

“And then I got it. I got it. I understood completely what Greeny was all about. And you know the history side, the fact that it’s been on all these albums and all this great music, but aside from all that, the bare fact of the matter is that it’s just an amazing-sounding guitar. It just blew me away and everything just kind of made sense. It’s just totally, completely amazing because this guitar has its own world, its own separate reality, completely separate to mine and I’ve never really owned a guitar that has its own personality. It’s completely independent of myself and I love that fact as well. And the resonance is pretty outrageous. It’s pretty loud acoustically, it has a lot of body to it and the tone rings through even without an amp.

“From time to time, I’ll pick up Greeny and I’ll play ‘Black Magic Woman’ or I’ll play ‘Coming Home’ or something and it feels there, the feel is just so there. I just can’t believe it. Another thing that really is amazing for me is the guitar was also played on Thin Lizzy‘s ‘Black Rose,’ which is one of my favorite Thin Lizzy albums.”

I’m not a guy who’ll buy a guitar just to stare at it and covet it; that is the death of a vintage guitar. Guitars are built to be played. The more they’re played, the better they sound. The more they’re played, the more reactive they are. I bought Greeny and, literally, by the next show she was up on stage in front of 40 to 50,000 people, being sweat on all over by me.

“I’m on my way to the studio right now. I texted my tech and said, ‘Have Greeny in tune, we’re using her today,’ and I’m going to try and use all of the three main sounds that are in her.

“When Jimmy Page says, ‘Yes, you should buy it, Kirk,’ then it doesn’t get much better than that!”

Here’s a video from a different time where he talked about the same guitar.