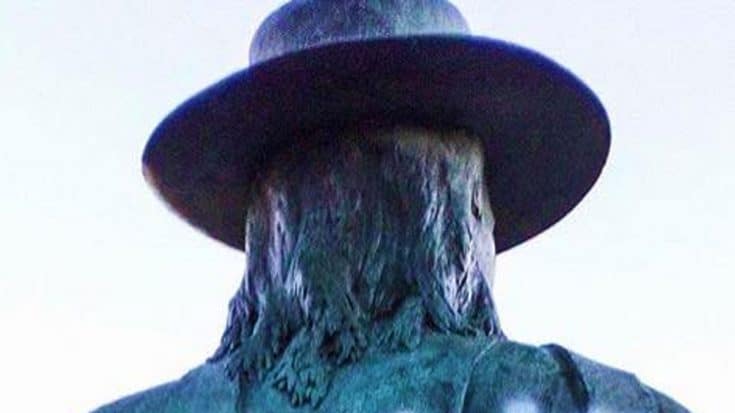 Texas blues legend Stevie Ray Vaughan’s legacy was disrespected in the most outrageous of ways this week when taggers vandalized his memorial statue with graffiti. The statue, an Austin city icon crafted from bronze by sculptor Ralph Helmick in the years directly following Vaughan’s death in 1990, bears some utterly ridiculous and barely legible writing across Vaughan’s back and was noticed earlier this week by passersby when the paint was much brighter.

MyStatesman reports that the paint has either “faded or been partially removed,” but the damage has been done; fans are livid, and Vaughan’s older brother Jimmie says he’s “speechless”:

We don't take too kindly to things like this in Texas! Speechless……. for now. JV #SRV

“We don’t take too kindly to things like this in Texas! Speechless…for now. JV #SRV” reads Jimmie Vaughan’s photo caption, posted to Facebook. Fans in Austin also took the chance to share their anger at the disrespect shown to Vaughan’s statue, posting to Instagram:

I DON'T HAVE WORDS… #SRV @Regranned from @jimmievaughanofficial – We don't take too kindly to things like this in Texas! Speechless…..for now! JV – #regrann

So pissed hearing about this! From the Stevie Ray Vaughan Memorial Statue in #Austin, TX. A site so many of us honor, and treat as sacred ground. Something now defaced, I know will come with very deep and swift justice! Texas’ Beloved Son. #SRV

Taggers in Austin, vandalized this iconic statue of Stevie Ray Vaughn. This is so disrespectful, the ignorance of some people is really upsetting! I would say more, but this is a family forum!! #SRV #stevierayvaughan #memorial #statue #austin #texas #ladybirdlake #SMH #disrespectful #taggers #vandalism #sucks

Absolutely sickening. Here’s hoping that local authorities catch the vandals that did this, and that it never happens again.