Justin Timberlake Digs Up His Blues Roots With Amazing “Dock Of The Bay” Cover With Steve Cropper! 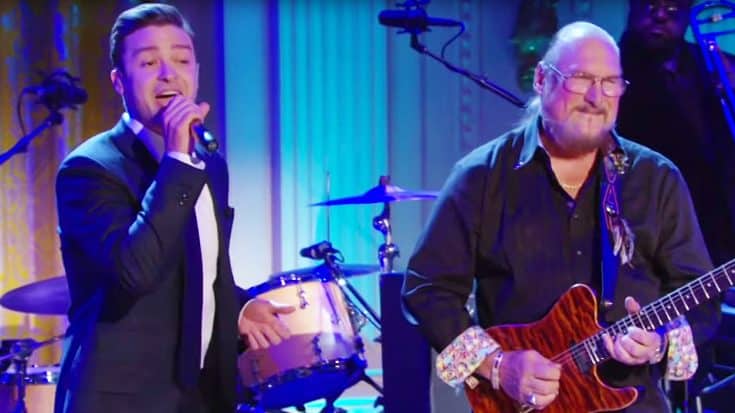 Everyone in the white house loved it!

Although Justin Timberlake rose to stardom through pop music, many people fail to forget that he grew up in Memphis, Tennessee, one of the hearts and souls of blues music. Justin has always stayed true to his roots (take for example his duet with Chris Stapleton a few years back), and this performance is no different!

Justin teamed up with Legendary guitarist Steve Cropper, and turned in a legendary performance of the blues classic “(Sittin’ On) The Dock Of The Bay” at the White House in front of former President Barack Obama. Justin’s voice is fantastic on this cover, and truly proves that his voice and style is so versatile, and able to adapt to many different genres. Of course, Cropper’s guitar playing completes this, as he was the guitarist on Ottis Redding’s original recording of this song! He looks and sounds just as great as he did back then.

Fun Fact: Otis Redding died in a plane crash on December 10, 1967, a month before this song was released (January 8, 1968) and three days after he recorded it. It was by far his biggest hit and was also the first ever posthumous #1 single in the US. Redding was a rising star moving toward mainstream success at the time of his death. There is a good chance he would have recorded many more hits if he had lived.

Check out the phenomenal cover down below, and let us know what you think!