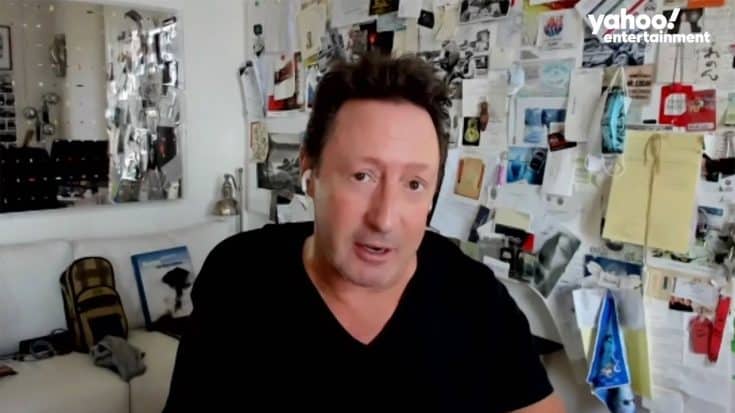 Julian Lennon has revealed that he felt uneasy seeing his late father John Lennon having a virtual duet onstage with Paul McCartney.

McCartney recently performed a duet virtually with John Lennon singing the Beatles’ classic “I’ve Got a Feeling,” on his set at Glastonbury on June 26. 2021 The Beatles: Get Back director Peter Jackson was also the mind behind the virtual presentation.

“I watched it on YouTube — and I kind of went, ‘Errrr … I don’t know if I’m comfortable with that.’ It shocked me.”

But when he got to see it in person at the Glastonbury Festival, he said:

“I actually enjoyed it.”

Meanwhile, director Jackson admitted that he almost didn’t pitch the idea of a virtual duet to McCartney. Earlier this year, he explained:

“I’d gotten cold feet because I thought, ‘How many harebrained suggestions like this has Paul gotten over the years? I don’t want to appear too geeky.’

“Finally, I thought, ‘I’m going to regret this for the rest of my life if I don’t even suggest it.’ I sent him a text. I didn’t send him the mock-up version, just a text trying to describe it to him. Within 10 minutes, he replied to me: ‘Yeah, this is a fantastic idea; let’s go do it.’ Then it was a frantic rush to restore frames that were missing from that long shot of John from Let It Be. But Paul was thrilled by it.”

While, Julian Lennon is set for the release of his seventh album, Jude, which comes out on Sept. 9. The album name is a nod to the Beatles classic “Hey Jude,” which McCartney wrote to comfort five-year-old Julian following his parents’ separation at that time. Lennon said in a press release about the upcoming record:

“Many of these songs have been in the works for several years, so it almost feels like a coming-of-age album.

“With great respect for the overwhelming significance of the song written for me, the title JUDE conveys the very real journey of my life that these tracks represent.”

You can watch the performance below.