Jon Bon Jovi Dances Onstage With His Daughter Stephanie, And It’s Too Damn Cute For Words 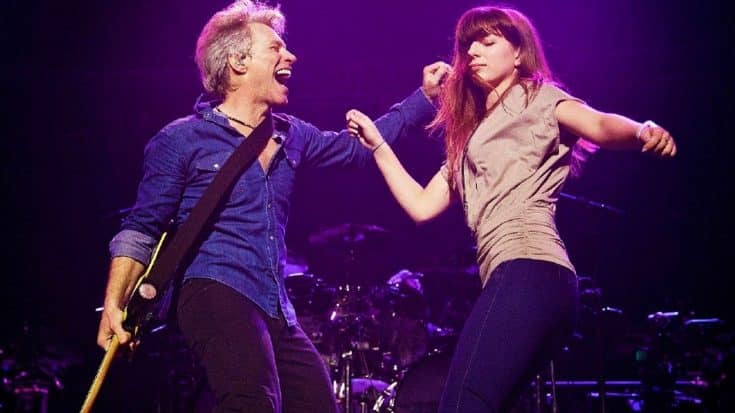 You don’t realize how quickly life moves until you’ve had kids. In the blink of an eye, sticky faces and sticky hands and calls for one more bedtime story give way to awesome young men and women ready to take on the world without mom or dear old dad holding their hand every step of the way – but if you’re as lucky as Jon Bon Jovi was last weekend, they won’t mind leaving adulthood behind in favor of being your little one for a few minutes.

During the Las Vegas stop on Bon Jovi’s This House Is Not For Sale Tour, the band struck up “I’ve Got the Girl” – which, if you’ve managed to catch Jon and the boys on tour in recent years usually includes home videos of Jon’s daughter Stephanie playing in the background – but the party really started when the now 23-year-old Stephanie Bongiovi joined her dad onstage for a seriously adorable father daughter dance party.

“Everybody’s got a little girl in their life,” Bon Jovi told the audience midway through the song. “Their daughter, their girlfriend, their wife, their mama — it all goes by so fast.

And they start out as little bitty babies and their future’s looking bright. And I wrote this song for that little baby, who’s now not such a little baby anymore.”

Written for Stephanie when she was just 7 years old, “I’ve Got the Girl” is a celebration of what it is to raise a little girl; sure, it’s the scariest damned thing on the planet but there’s no greater honor than watching over an awesome little human on her journey towards becoming an awesome young lady. This video is too cute for words – be sure to check it out and when you’re done, grab your own best girl for a dance or two!