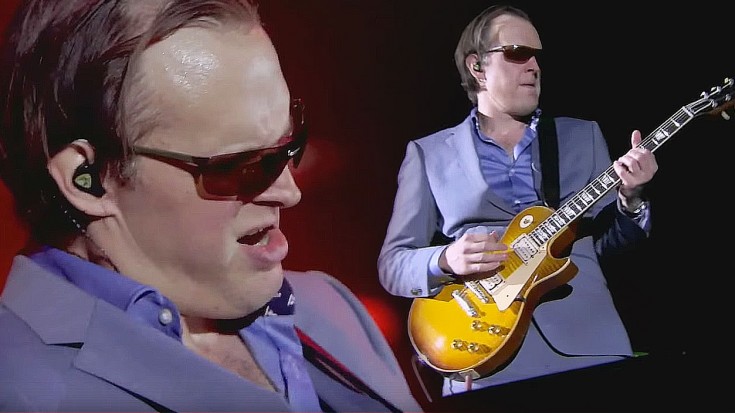 At 38 years old, Joe Bonamassa’s had quite a life. Where most kids get their start playing high school talent shows or jamming Deep Purple’s ‘Smoke On The Water’ at their local Guitar Center, Joe cut his teeth as a professional guitar player by opening up for none other than the late B.B. King at the tender age of 12. He’s equal parts old school and something new that’s uniquely Joe Bonamassa, and his wildly successful solo career is proof – just check out this performance!

Joe’s 2013 appearance at London’s Hammersmith Apollo is everything guitar nerds like us have ever dreamed of; clad in a snazzy suit with his signature Prada sunglasses, Joe launches into a blistering rendition of ‘Just Got Paid’ that’s absolutely out of this world and at one point, even plays snatches of Whitesnake’s ‘Still Of The Night’ and Led Zeppelin tunes to keep it interesting.

Fun Fact: The first rock song he mastered, as a child, was Jimi Hendrix’s ‘Voodoo Chile.’

For as incredibly gifted as Joe Bonamassa is, he’s incredibly down to earth – just look at how much fun he’s having onstage! He may be a guitar god in music circles, but at his core Joe is still that 12 year old kid that can’t believe he gets to live his dream night after night.