Jethro Tull, Joe Bonamassa Take Their Wildest Ride Yet For Off The Rails Spin On “Locomotive Breath” 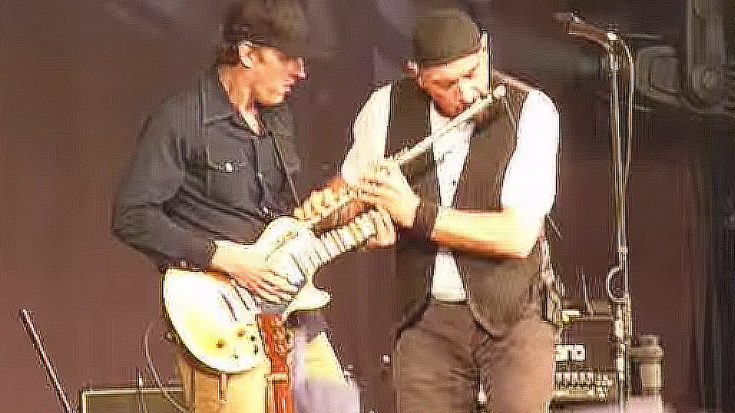 A Wild Ride From Start To Finish

At 39, Joe Bonamassa’s life has been one big wild ride that’s seen him sharing the stage with everyone from B.B. King to Eric Clapton but in 2011, the young blues legend went completely off the rails when he was invited to hit the stage with British rock legends Jethro Tull for “Locomotive Breath”!

“When I wrote it, I wasn’t deliberately setting out to write a piece of music on a particular subject. But it evolved during the writing process into being not terribly specific, but about the issues of overcrowding – the rather claustrophobic feel of a lot of people in a limited space.” – Ian Anderson

The 5 minute Aqualung classic stretches into an extended jam spanning nearly 11 minutes in length in the footage you’re about to see, with the then 64-year-old Ian Anderson darting back and forth across the stage with his flute, ducking and diving in between Bonamassa and Jethro Tull guitarist Martin Barre in between a stellar vocal delivery of “Locomotive Breath” and still looking for all the world like a man out of time with a story to tell.

Joe Bonamassa is given the opportunity of a lifetime when it comes time for his solo and he’s seen trading licks with Martin Barre, whose “Aqualung” guitar solo came in at #25 on Guitar World’s list of the 100 Greatest Guitar Solos of All Time, showing that while he’s shared the stage with legends from all around the world and is himself hailed as the future of the blues, Joe’s not immune to the magic of sharing a stage and a song with someone who paved the way!