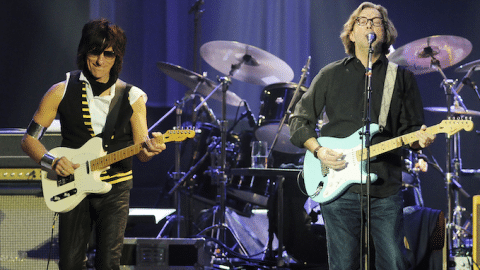 The whistling started even before the music began. The two guitar heroes are just that sensational. They’re also close friends for better or worse. Eric Clapton and Jeff Beck have performed together many times and made history once again with their duel performance. This time around they joined forces on February 13, 2010 at The 02  Arena in London.

Jeff Beck stated about their performence together prior to London in Japan, “Eric and I played together in Japan earlier this year and had a blast. Since then we have been in regular contact and talked about doing a similar show for our fans. ”

Their small tour together was dubbed ‘Together and Apart.’ Seems like the perfect label, given the rock legends  friendship spanning back to the Yaardbirds days in the 1960s.

Eric Clapton had a solo set with “Layla,” “Driftin’ Blues, and a handful of other hits. Beck’s solo set included “Eternity’s Breath,”Led Boots Play,” and a few more tracks and covers. The two musicians together performed mostly covers including one gorgeous classic.

Clapton and Beck started “Moon River,” to an already ecstatic crowd. They began by allowing the guitars to do all the “singing.” Eric began to sing the timeless tune while Beck reaches amazing tone with the guitar. He sounded like gold was oozing from his instrument. There’s no way around it, the performance was magical.