Jeff Beck And David Gilmour Trade Licks On “Jerusalem,” And It’s As Awesome As You Expected 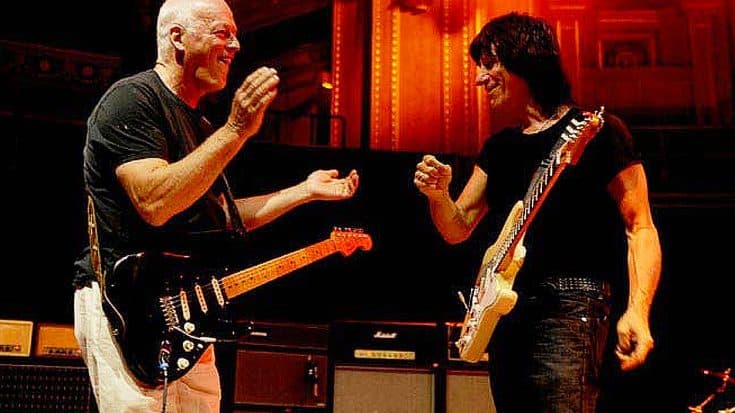 If you were one of the lucky ones in the house for Jeff Beck’s sold out July 4 Royal Albert Hall performance back in 2009, congratulations: you’ve got yourself a memory you can tell your kids and grandkids about for the rest of your life. For the rest of us mere mortals who missed out on the fun, that night was absolutely magical as Jeff dazzled with nearly two hours of guitar playing before he left the stage, convincing the audience that that was it for the night.

It wasn’t until he re-emerged a few moments later with Pink Floyd’s David Gilmour at his side that they realized this was no ordinary Jeff Beck show, delighted as David picked up his black Fender Stratocaster and jumped into an instrumental version of “Jerusalem” with Jeff for the show’s encore. The magic didn’t stop there; as “Jerusalem” wrapped, Jeff and David gave the crowd a little something extra with a surprise performance of “Hi Ho Silver Lining,” a crowd favorite that saw Jeff breaking his own rules and singing lead while David supported him on backing vocals. What a night to remember!

You may have missed it the first time around, but you never have to miss it again; check it out in the video below and watch to your heart’s content!