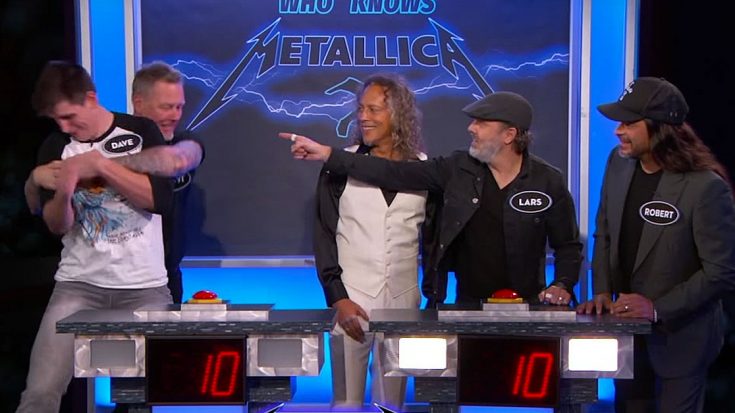 Who Knew James Was This Funny?

One of the coolest things about Metallica’s new album Hardwired…To Self Destruct is the fact that pretty much any night of the week, you can turn on a late night talk show and find the band hanging out with everyone from Fallon to Kimmel – and they’re never anything short of absolutely hilarious. This week saw Metallica hanging out on Jimmy Kimmel Live, engaging in a fierce battle of ‘Who Knows Metallica?’ with superfan Dave and the stakes couldn’t be higher; if Dave took the crown, he would receive a signed ESP guitar – if Metallica won, they got Dave’s wallet.

For 6 minutes, we were left cracking up as Dave fought to hit his buzzer before frontman James Hetfield had a chance to slide over and put him into bear hugs, shove him at the last second, or cover his mouth completely (that is, when Kirk Hammett wasn’t trying to sabotage him), proving to be the real star of ‘Who Knows Metallica?’. We won’t spoil who won the game, but after watching this, it’s pretty clear that the viewers at home and in the studio were the real winners!