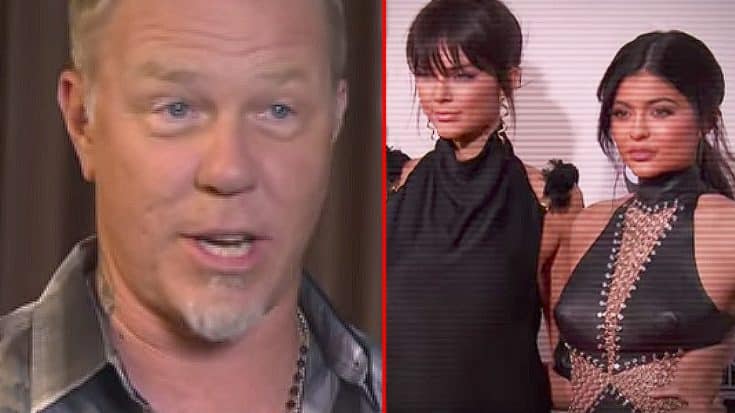 It’s been a month since Jenner sisters Kylie and Kendall ran into legal drama stemming from their award winning decision to plaster their faces and logo all over iconic rock band t-shirts, but still the hits keep on coming. We’ve heard from the estates of hip-hop legends Notorious B.I.G. and Tupac Shakur, The Doors sounded off in an epic rant that essentially reduced the girls to being famous for doing absolutely nothing of actual value, and Sharon Osbourne delivered a killing blow in the form of “Stick to what you know…lip gloss,” but at long last we’re hearing from Metallica, whose shirts were also defaced and in true Metallica fashion, singer James Hetfield summed the entire stunt up in just one well timed word: “Disrespectful.”

In an interview with Entertainment Tonight, Hetfield addressed the issue of Metallica shirts being used for the Jenners’ latest fashion experiment, saying:

“I guess what they were thinking is, ‘We can do whatever we want.’ To me, it’s disrespectful. We’ve spent thirty-six years working hard, doing our best to keep a really close connection with people, make every note count, and someone just throws something up over something that we feel… Not that it’s sacred or anything, but show some respect.”

Sorry James, we’ve got to disagree with you on that last point. 36 years crafting a musical legacy on blood, sweat, tears and actually earning what you’ve got is pretty damn sacred, and to see your legacy defaced by people who will never know what that’s like is the ultimate slap in the face; rocking a band shirt like Metallica’s is one thing, but to totally deface it? James is right – it’s disrespectful beyond belief.