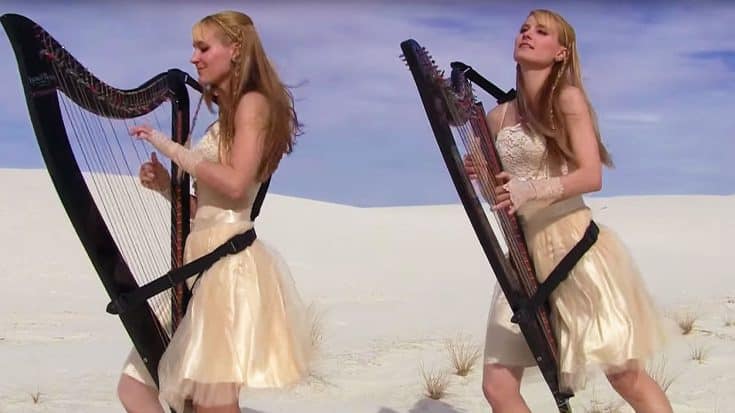 Heavy metal giants Metallica turned the music world on its head when they jumped onto the scene. No one had ever really heard anything like what Metallica brought to the table, and they ended up gathering a fan base that could be considered the most passionate in all of rock n roll.

If you’re a Metallica fan, you have to check out what these two twins did to the band’s biggest hit: “Enter Sandman.” Commonly known as the Harp Twins, Camille and Kennerly turned this normal metal anthem, into a beautiful and elegant song, by playing it on harps.

The twins strummed this song on their harps and got some help from their friend Kevin Bartlett, who provided a calming backbeat on the drums. As usual, the twins coordinated an appropriate outfit, and even recorded it in a desert with a ton of sand surrounding them, which served as a fitting setting.

In one interview, they revealed that they practice for a couple of hours every day. So you can pretty much guess how much work and effort they pour into every performance.

“We started playing harp in middle school. We knew someone who played harp and she let us try out her harp. We were hooked! Harp had always seemed like a magical instrument to us, but our mom didn’t have the money for a harp or lessons. So, we earned the money ourselves for a pre-owned harp by babysitting, dog-walking, and other small jobs. When our mom saw that we were serious, she later helped us to purchase a second pre-owned harp so that we could play duets. It was always our dream to play harp together.” – The Harp Twins

Check out the amazing video down below and let us know what you think!