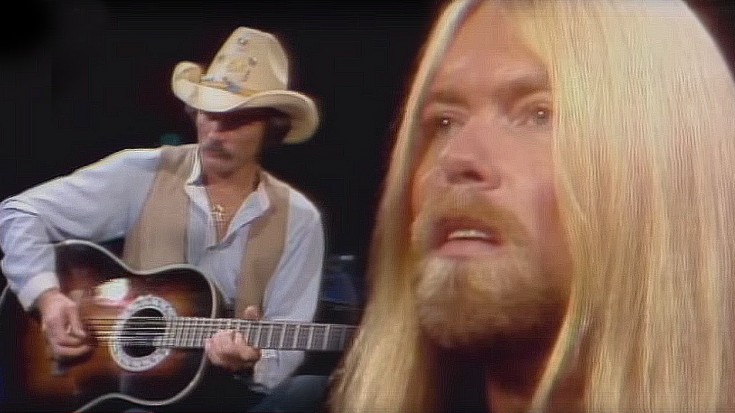 The result of a songwriting marathon that yielded 1 good song out of over 200 written, The Allman Brothers Band’s iconic ‘Melissa’ isn’t just our favorite – it was Duane Allman’s, too. Gregg Allman loves telling stories about the times after dinner when Duane would often ask him to “play [me] that song – the song about that girl,” and every performance of ‘Melissa’ following Duane’s 1971 death at the age of 24 feels like it’s more for Duane than for the audience.

In 1981, The Allman Brothers Band took the stage at NBC Studios for a performance of ‘Melissa’ that seems a little sadder and much more soulful than others; coming up quickly was the 10th anniversary of Duane’s death, and what better way to remember someone like him than with an emotionally charged performance of his favorite song? Gregg Allman, despite being seated between Dickey Betts and “Dangerous” Dan Toler seems to draw into himself – it’s almost like he’s recalling those nights after dinner when he’d dig out his guitar and play for Duane.

Fun Fact: Like Gregg, Duane was left-handed, but learned to play guitar right-handed.

Hands down, this is the most beautiful performance of ‘Melissa’ we’ve ever seen. Gregg Allman is at the top of his game, and with bandmates like Betts and Haynes who together create pure magic sharing the stage with him, the sky was absolutely the limit that night!

Crossroads
Seem to come and go, yeah
The Gypsy flies
From coast to coast

Freight train
Each car looks the same, all the same
And no one knows
The gypsy’s name

No one hears his lonely sighs
There are no blankets where he lies
In all his deepest dreams the gypsy flies
With sweet Melissa, mmm

Again the morning’s come
Again he’s on the run
Sunbeams shining through his hair
Appearing not to have a care
Well, pick up your gear
And gypsy roll on, roll on

Crossroads
Will you ever let him go? Lord, Lord
Will you hide the dead man’s ghost
Or will he lie, beneath the clay
Or will his spirit float away?