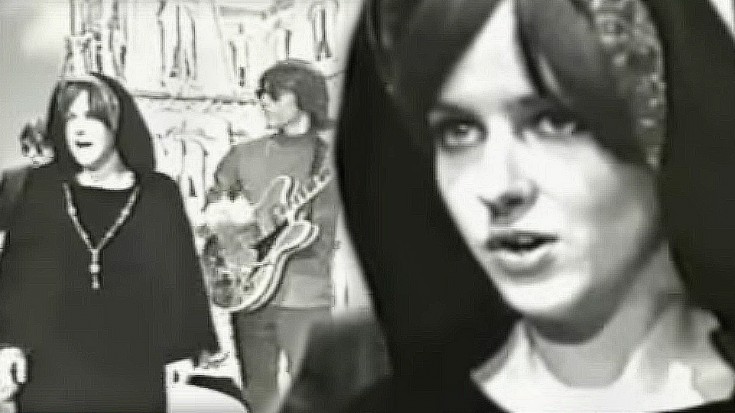 “The Most Talked About Group In The Whole World.”

Iconic music television show American Bandstand saw a lot of musical acts grace its stage over the course of its nearly 40 year history; from Jerry Lee Lewis to Run DMC, there was no limit to the show’s broad range of talent – that is, until Jefferson Airplane. In 1967, the psychedelic rock band appeared on American Bandstand in support of their album Surrealistic Pillow; singer Grace Slick, sporting a stylish – if not slightly sacrilegious – nun’s habit and a pair of gogo boots leads the audience and viewers at home on a surreal trip down the rabbit hole that was their unique brand of rock and roll.

Described by American Bandstand host Dick Clark as “a little controversial” in one breath and “the most talked about group in the world” in another, Jefferson Airplane resonate power and strength while performing “White Rabbit” – never once looking at the cameras, they look to each other or in Grace’s case directly at the audience, refusing to break eye contact with a crowd that surely didn’t know what to make of the sextet.

Fun Fact: Slick got the idea for “White Rabbit” after taking LSD and spending hours listening to the Miles Davis album Sketches Of Spain.

In a rare moment of levity, after the band’s explosive performance of “Somebody To Love” the band is officially introduced and a brief interview given; an out of breath Grace Slick actually momentarily forgets the name of late guitarist and Jefferson Airplane co-founder, Paul Kantner! While the band would never make another appearance on the show prior to its cancellation in 1987, Jefferson Airplane yet again proved to be groundbreaking with a performance that no doubt put America’s counterculture in the spotlight where it belonged!