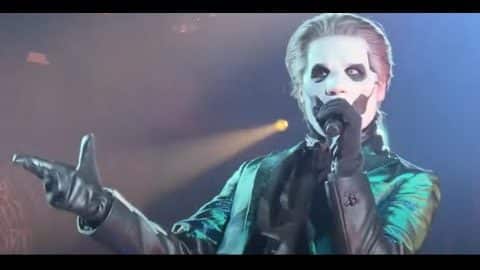 Ghost performed their new track “Kaisarion” from their upcoming album “Impera” which is set to release on March 11. Impera includes live debuts of the previously released single “Hunter’s Moon” and cover of Metallica‘s “Enter Sandman.”

In an exclusive interview of Kerrang! magazine, singer Tobias Forge talked about behind the song Kaisarion:

“There was a building called Caesareum in ancient Alexandria. Roughly what happened was that the teacher and philosopher, Hypatia, was murdered by Christians. She was molested and murdered inside the building, because of her pagan beliefs, because she was a believer in science and real things. This was in the beginning stages of Christianity, when it was just an insane cult, before it got the mandate of a book put together by Romans in 325 to harness that shit.

This was like an underground group of terrorists, basically, who couldn’t stand to see some female smartass preaching or telling people that the world wasn’t flat. And it didn’t happen at the same time, but they also burned down the big library in Alexandria, which must have been an enormous, enormous loss for mankind in terms of knowledge and historic accounts. There you go – for the greater good.

I think that’s a nice symbol for what you can see now. You can see likenesses of it in public book burnings and stoning and killing everything that doesn’t match with a sort of a flat Earth reality that some people live in. Or storming the Capitol and wanting to hang people. It’s a symbol for those sorts of movements that are always targeting smartness and enlightenment, and thinking.”