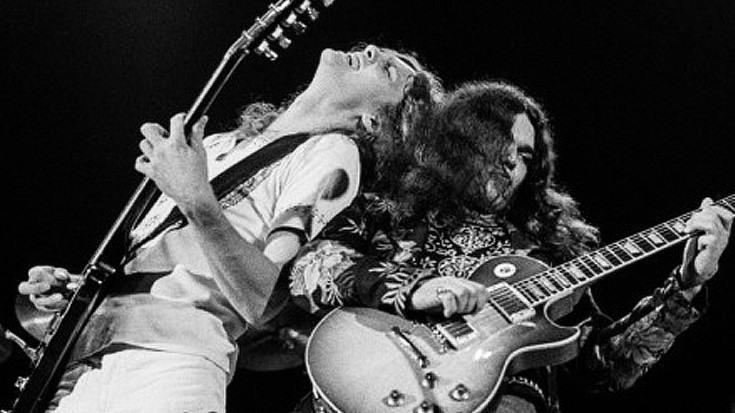 Maybe it’s luck, maybe it’s Divine will – or maybe it’s just good old fashioned stubbornness and a fighting spirit that brought Lynyrd Skynyrd back onto the stage after the tragic plane crash that claimed the lives of their friends. Many said it couldn’t be done: with three key members of the band gone, guitarist Gary Rossington faced a long road of recovery after walking away from the crash with two broken arms, legs, feet and wrists alongside several broken ribs and a fractured hip. Guitarist Allen Collins had to undergo numerous operations to renew a heavily damaged arm that nearly required amputation.

Despite the long road ahead, in January 1979 they joined Charlie Daniels’ Volunteer Jam V where for the first time since the crash Lynyrd Skynyrd performed – choosing the ever symbolic “Free Bird” to celebrate what was both a spirited and bittersweet reunion. An instrumental with a lone microphone stand at the front of the stage, “Free Bird” may have begun with a whisper – but it ended with a roar! With a flourish of piano keys, Billy Powell leads the band on the spirited jam session we all know and love with Allen and Gary launching into a two pronged guitar attack for the song’s solo and the crowd going absolutely wild at seeing shades of a band they thought they’d never see again.

That night, “Free Bird” meant more to Lynyrd Skynyrd than ever before. It was a eulogy for the ones they loved and lost, saying the “I love you, see ya later” they didn’t get a chance to say in 1977; but by the same token, “Free Bird” was a thank you to the God that allowed them to come together in the spirit of rock and roll and friendship, no matter how short the time may have been.