Foo Fighters Pull Off Electrifying AC/DC Cover, But Check Out Their Special Guest – MAN Does He Rock 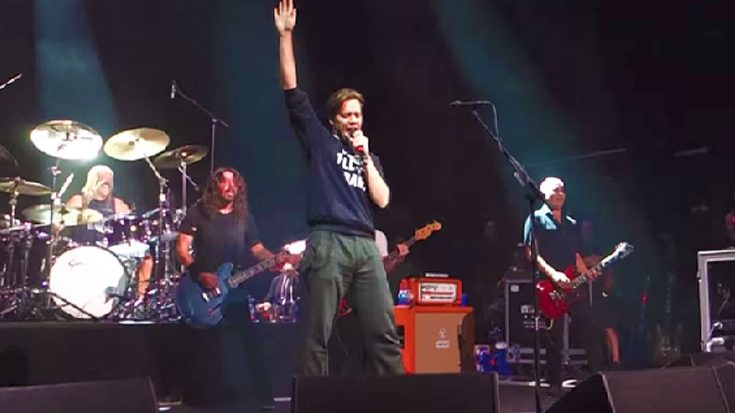 When in Rome, do as the Romans – or in the case of the Foo Fighters, when in Sweden, enlist the help of one of the country’s favorite frontmen when it comes time to throw it back a few decades during your secret gig. Sunday night found the band rocking Stockholm, Sweden’s Vasa Teatern in celebration of their newly released album Concrete and Gold when suddenly, frontman Dave Grohl began gushing about a particular Stockholm native and the band he’s in, suggesting to a cheering crowd that in honor of being reunited with his old friend he should come out onstage for a song or two.

Moments later, The Hives frontman Pelle Almqvist emerges from backstage – sporting a sweater that says “Boogie Til You Barf,” Pelle makes it clear that he’s onstage to have a good time from the very beginning, dancing around excitedly as Grohl introduces the song and teases the crowd with the opening notes to “Stairway To Heaven”.

“Tonight I thought it would be a good idea if we did a song together, one that we’ve never played with him before, but I think it makes perfect sense for this show. I’ve always wanted to sing this song.”

Just kidding! The Foo Fighters and Pelle instead launched into a rip roaring cover of AC/DC’s “Let There Be Rock,” Almqvist proving why his nickname is “Howlin’ Pelle” as he runs back and forth across the stage and embodying the same raw energy and charisma that defined late AC/DC frontman Bon Scott with a seemingly never ending supply of that special spark that only truly great rock and roll frontmen seem to have.

It can be risky to bring on a special guest – especially for a song like “Let There Be Rock” – but the Foo Fighters knocked it outta the park not just once with their song choice, but twice with the addition of Pelle Almqvist on vocals. Check it out in the video below!