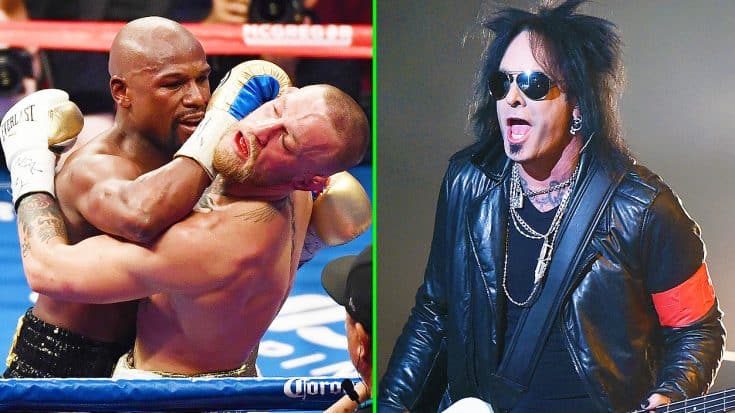 The fight of the century

Saturday night the world paid witness to one of the most highly anticipated sporting and boxing events in history. UFC world champion Conor McGregor stepped into the boxing ring to take on the undefeated Floyd Mayweather in a match that was begged for by the fans of combat sports. Conor looked to tamper Floyd’s 49-0 record, and pull off arguably the biggest upset in sports history.

But Floyd’s skill, unfortunately, overtook Connor’s little boxing experience and Floyd capped off his career with an unblemished 50-0 record with a TKO 1:05 into the 10th round. Conor put up a hell of a fight, however, and impressed a lot of people. The fight was watched worldwide, and celebrities and rockers tuned in to give their input during the fight, and after to share their reactions to the result

Check out some of the best social media reactions down below!

Nikki Sixx was tuned in the whole fight and was rooting for McGregor. In the end, he enjoyed the fight as a whole.

“The Rock” weighed in and congratulated both fighters.

Great fight boys. Historic night. Respect to Floyd Mayweather. Masterful performance tonight and historic career. 50-0. And massive respect to my brotha @thenotoriousmma for having the guts and warrior mana (spirit) to dent the universe to do big things and take risks that no one else is doing. No one. #Respect ??

The late night talk show host fired off some hilarious tweets throughout the evening.

When Floyd walked out in the mask, Kimmel had the perfect reaction.

what’s the over/under on the word “histrionics”? #MayweathervMcgregor

Steve Harvey was at the event, and got a picture with the winner, and threw some respect to Connor.

Congrats to @FloydMayweather. 50 wins. Much respect to @TheNotoriousMMA. pic.twitter.com/qocLaNmwS3