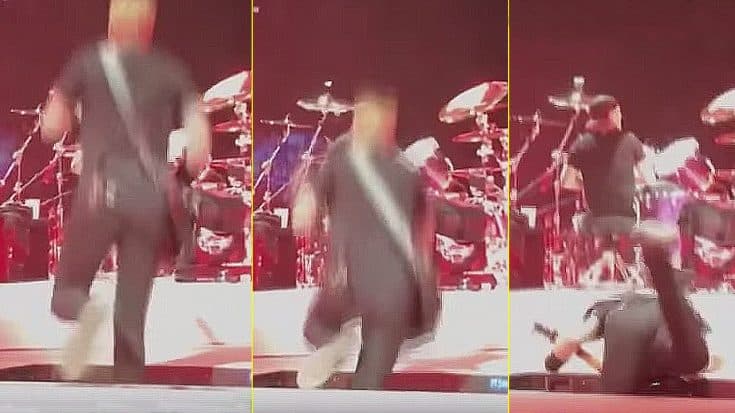 Metallica frontman James Hetfield got a little more than he bargained for during last night’s show in Amsterdam, after suffering what looks like a pretty nasty fall onstage. The band was well into their set at Amsterdam’s Ziggo Dome and performing “Now That We’re Dead” from their critically acclaimed new album Hardwired…To Self Destruct when four sections on the stage opened up in preparation for the band’s percussion tables to rise for the next song.

Hetfield, not realizing that one of the sections had opened up directly behind him, walked across the stage and actually fell directly into the hole, visibly trying to catch himself despite his surprise but still falling onto his guitar and getting his left leg caught in the hole. Fans caught the moment on camera in a variety of angles – some of which can be seen below in a really neat little compilation video.

Though the fall did look incredibly painful, Hetfield popped up with the help of stagehands and promised fans that he wasn’t physically injured; his ego, however, was another story. Kudos to James for being such a great sport about it and we’re so, so glad he wasn’t seriously injured!