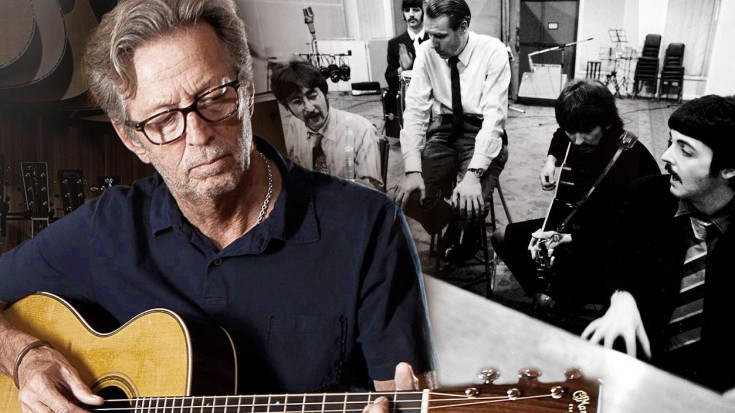 Clapton Joins The Beatles For A Day

It’s no secret that The Beatles’ George Harrison was an accomplished guitarist and songwriter in his own right; in fact, we wish there were more Beatles songs that featured his immense talents. However, even George was able to admit when he was stuck; when he brought ‘While My Guitar Gently Weeps’ to the table during the recording of The White Album, he had a hard time convincing the band to use it and an even harder time playing the lead guitar part he had in mind.

Enter real life guitar hero Eric Clapton, whose presence not only convinced the remaining Beatles to take the song seriously, but turned the song’s skeleton into the emotionally charged song that George wanted it to be!

For the impression of a person weeping and wailing, Clapton used the fingers on his fretting hand to bend the strings deeply, in a highly expressive descending vibrato.

As much as I love The Beatles, it’s Clapton’s soulful, blues-soaked lead guitar part that truly made ‘While My Guitar Gently Weeps’ what it is. He’s always had a fantastic way of injecting emotion into whatever he plays, and in this case it worked beautifully with what the normally shy, deeply introspective Harrison was trying to convey.