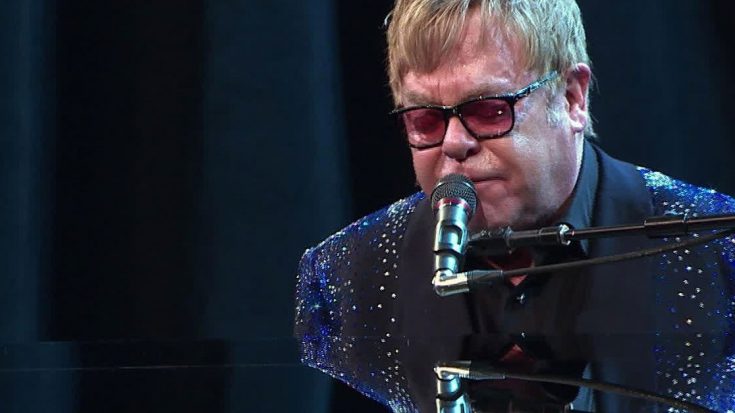 The world is saying goodbye to pop icon George Michael, leaving flowers at his home in Oxfordshire and penning heartfelt, touching tributes to a man that proved to be every bit as kind as he was talented. As tributes and condolences continue to roll in this week, we find George’s old friend Elton John leading the charge – first offering up a grief stricken Instagram post expressing his sorrow and shock at the loss of his friend and then, two nights ago, delivering a heartbreaking tribute to George during the first of a series of New Years concerts in Las Vegas.

Seated at his piano with a giant photo of George Michael plastered on the giant monitor behind him, Elton is visibly choked up and breaks down after singing “Don’t Let the Sun Go Down On Me” – a song the pair performed in 1985 at Live Aid and again 6 years later at the final show on Michael’s Cover to Cover Tour at Wembley and saw great critical success with as a result.

“After he sang for George, he turned his back on the audience and was shaking and looked like he was crying. I was in tears and so was everyone around me.

He received a standing ovation and had to be consoled by a band member before beginning the rest of the show. There wasn’t a dry eye in the house,” says fan Chris Stacey.

Elton has performed a great many tributes to his fallen friends over the years, but there’s something about this particular tribute to this particular friend that hits home; it’s never easy saying goodbye to someone that was a tremendous part of your life, and to watch Elton grieve his friend’s loss so publicly is something that hits the part of you that knows exactly what he’s going through.

#EltonJohn tonight in #Vegas with his tribute to #GeorgeMichael #rip