Eagles Fly Again At Classic West, And Deacon Frey Is The Spitting Image Of His Old Man 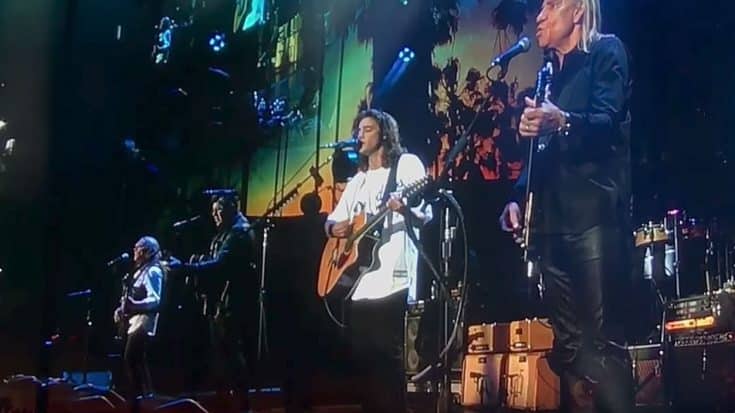 The Eagles flew again this weekend, their first performance since the death of singer Glenn Frey and in true Eagles fashion they weren’t just good – they blew the lid off of Los Angeles’ Dodger Stadium, their career spanning 23-song set shaking the venue to its foundation as fans came up close and personal with new band members Vince Gill and Deacon Frey for the very first time.

If you were worried about the younger Frey’s abilities to hold his own as he filled some of the biggest shoes he’ll ever fill, don’t be; 24-year-old Deacon was the spitting image of his old man as he tackled classics like “Take It Easy,” “Peaceful Easy Feeling” and “Already Gone,” looking and sounding for all the world like Glenn with his long brown hair pushed back by his sunglasses, acoustic guitar slung across his body in a way that was as comforting a memory as it was painful.

A fiercely gifted musician in his own right, Deacon’s spent his entire life preparing for this moment whether he knew it or not; a regular staple at the House of Blues benefit for Africa Schoolhouse, he shared the stage with his dad for several years and impressed the audience with a natural musical ability that until Glenn’s death was nurtured under the watchful eye of one of rock’s most beloved frontmen.

A debut appearance that beautifully showcases both the striking similarities between father and son as well as the things that are so uniquely Deacon Frey, we’re convinced that wherever Glenn is, he was beaming with pride; not just at the legacy his son is keeping alive, but the one he’s fearlessly forging for himself. Check out Deacon’s take on “Take It Easy” in the video below!