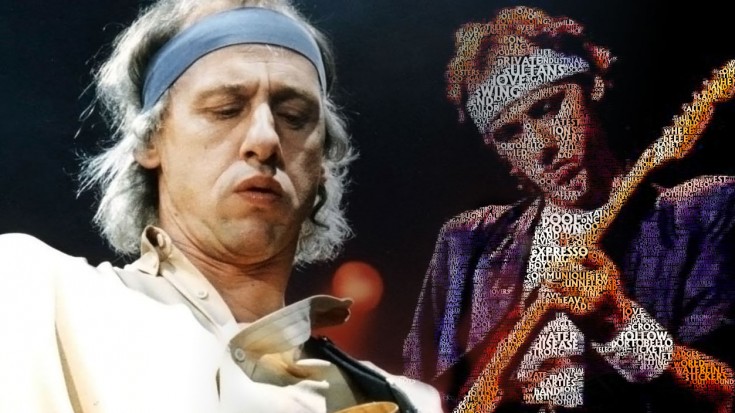 “Goodnight and thank you, We are the Sultans Of Swing!”

‘Sultans Of Swing’ by Dire Straits came about when guitarist and singer Mark Knopfler attended a club performance by a local band. He had a serious gift for turning the ridiculous, everyday things that people say and do into songwriting material, and ‘Sultans Of Swing’ was no different! Written by Knopfler, the song is about a man who goes to watch a band’s performance for the music and getting annoyed with the band’s fixation on their image.

Where Did ‘Sultans Of Swing’ Come From?

The band seen by Mark Knopfler in 1973 ended their mediocre set with the lead singer announcing, with no apparent irony, “Goodnight and thank you. We are the sultans of swing.”

Needless to say, the phrase was so ridiculous, it had to become a song!

Regardless of the song’s origins, ‘Sultans Of Swing’ is Dire Straits’ most well known song and quite a good one, too! It’s such a positive song, about loving the way that good music can make you feel. Any good band should rely on having great material instead of a great image, which Dire Straits definitely mastered!

Well, now you step inside but you don’t see too many faces
Coming in out of rain to hear the jazz go down
Competition in other places
Oh, but the horns, they’re blowing that sound
Way on down south, way on down south London town

And Harry doesn’t mind if he doesn’t make the scene
He’s got a daytime job, he’s doing alright
He can play the honky tonk like anything
Saving it up for Friday night
With the Sultans, with the Sultans of Swing

And a crowd of young boys, they’re fooling around in the corner
Drunk and dressed in their best brown baggies and their platform soles
They don’t give a damn about any trumpet playing band
It ain’t what they call rock and roll
And the Sultans, yeah, the Sultans, they play Creole, Creole

And then the man, he steps right up to the microphone
And says at last just as the time bell rings
“Goodnight, now it’s time to go home.”
And he makes it fast with one more thing,
“We are the Sultans, we are the Sultans of Swing.”