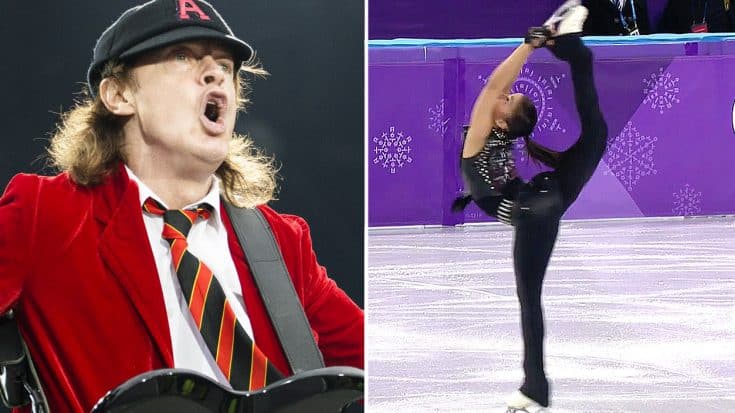 The Winter Olympics are nearly over, but the buzz surrounding Hungarian figure skater Ivett Toth rages on.

Toth, 19, made headlines earlier this week after delivering a one woman tribute to AC/DC during the Ladies’ Short program, skating her little heart out to “Back In Black” and “Thunderstruck” to the delight of rock fans watching the event. Blowing off the usual frilly costume and flawless makeup you usually see in figure skaters, Ivett went a different route – opting instead for a leather outfit and fingerless gloves, complete with a leather vest with a photo of AC/DC guitarist Angus Young on the back.

There is a girl ice skating to AC/DC right now. She just made my night.

I know nothing about figure skating, but I’m cheering for the girl who just did a routine to @acdc Thunderstruck. ??Of course the narrow minded douche announcers buried her choice of music. #WinterOlympics

While this is the second time that rock played a role in the Winter Olympics as Disturbed’s cover of “Sound of Silence” made an appearance, it’s certainly the most entertaining to watch! Toth took advantage of a recent rule change from skating’s governing body to allow for a range of rock and pop tunes to be played, and the joy it brought her absolutely shows.

Sure, her performance wasn’t the most polished; Ivett stumbled a few times, but the smile on her face and sheer enjoyment she got from skating to music she actually likes gives us a cool glimpse into why she fell in love with ice skating in the first place.

this lil one came in with the AC/DC knowing full well the judges would hate it and sis did NOT give a fuck pic.twitter.com/qBWX3lZslG

They completely dismissed the girl who skates to AC/DC only because it wasn’t dainty and pretty enough for them. She did great and was brave enough to do that routine at the #Olympics , these announcers are shit #pyeongchang2018 #FigureSkating

Suddenly, rock and roll isn’t just for dive bars and rough and tumble types – it’s capable of standing on the world stage and making its presence known in a beautiful, exciting new way. Check out Ivett’s performance here via NBC!